Gone is the tactile rubber-like feel of old, replaced with a varnished look that helps the 500v slip in and out of pockets and bags with ease. The two-tone colour scheme isn't new, but the way the lighter, silver tone wraps all round the sides, top and bottom then folds horizontally across the front to highlight the control keys, and folds over the back at the top to highlight the camera and speaker gives the handset a modern look that, for once, is more phone than PDA.

The earpiece is a simple slit in a plastic front that runs smoothly right over the very nice bright, crips, high-contrast 320 x 240 screen - bigger than the 750v's 240 x 240 job - to stop at the control area. Around the ring-shaped navigation cluster are two soft-menu keys, a Home button and, in place of the usual OK key, a Back button. Either side of all these are big call make and break buttons fitting flush with the other controls.

Once again, there's micro Qwerty keyboard, complete with an inlaid numeric pad in a different colour. But this time all the keys are laid out on an grid of right angles rather than the upward curves of the 650 and 750. Single-handed typing's a little trickier, perhaps, especially reaching for the keys in the bottom right-hand corner with your thumb, but two-thumb texting is no harder than it was with the old keyboard.

There's a tiny recessed power button on the top of the 500v - at the other end is the microphone, a mini USB port and a socket for the bundled earpiece's 2.5mm jack. The left-hand side of the 500v is home to the usual Treo volume keys and a third, customisable button that by default launches Internet Explorer.

The 500v makes one step backward: the placement of the Micro SD card slot under the removable battery, next to the SIM slot. Recent Palms have externally accessible memory card slots, and switches on the top to activate silent mode. We've always felt this switch was a key differentiator that allowed Treo users to go straight into meetings or movies while owners of other handsets were left in working their way through menus to quieten their phones.

Palm has gone further than before to hide away the usual Windows Mobile UI. Here, the Today screen is just a photo with the customary status icons, date and time. Pressing the Start soft menu brings up Palm's own GUI, which runs a series of icons below the status panel, all in grey except for the central one, which is displayed in colour. Pressing the left or right keys on the navigation control's ring takes you to the next icon along. In turn, that changes the contents of the panel below the selected icon. Each is a list of options, pictures, videos, whatever that you scroll up and down through using the navigation ring. 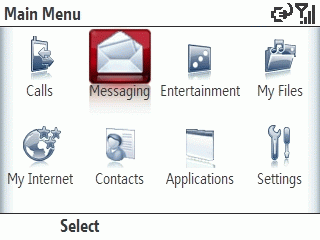 ...and the Main Menu

You can just see the edges of the next panels along, a clever touch that doesn't take up much screen space but makes it clear there are more things to the left and right of the panel you're looking at, reinforcing the way the UI works. Moving from one to the next changes the soft menus.