It's not for the little guy

A patent for the handling of gratuities in card payments has been revoked by the UK Intellectual Property Office (IPO) for being a business method implemented by a computer program. The decision follows recently-revised guidance on patentability.

One of the inventors told OUT-LAW today that his company spent more than £100,000 trying to enforce and defend the patent before passing the rights to another company, which he described as a "patent troll". He believes that company will appeal this month's ruling. 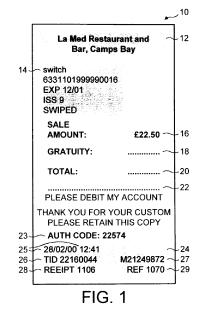 At the time the patent was filed, in 2001, the payment system used by most restaurants was "off-line", requiring an authorisation request to a customer's bank when the customer presented his or her card. The request checked whether there were sufficient funds in the account and no actual payment transaction occurred at that point. The transaction was held within the terminal and was only completed when the bank host dialled the payment terminal (usually at night) and up-lifted the transactions. That process is known as polling.

Before chip and PIN became ubiquitous, a restaurant had to remove a customer's card, swipe it at a terminal and take a signature slip to the customer. Typically, the customer then had the option to add a gratuity on the signature slip. To avoid authorising the tip as a separate transaction, the polling process tolerated a 15 per cent variation between the actual amount debited overnight and the amount authorised at the terminal. That variation presented a risk of fraud: a waiter could charge more to a card than was written on the signature slip to boost his pay. If that sum was small, say five per cent, the cardholder might never notice it or bother to report it.

The invention of Jeremy Nielsen and Hugh O'Donnell removed that risk by authorising a sum that included the tip. That also removed the need for overnight polling – a service that typically cost restaurants between £10 and £15 per month for each of their terminals.

Their patent described a process of generating and handling an electronic online authorisation and uploading request relating to a payment transaction. The customer would be offered the chance to add a gratuity and a request for authorisation of the total would be constructed. A request would then be made over a telecoms network and a receipt generated for the customer.