Mars Express has completed 5,000 orbits of the red planet, just short of four years after it arrived on Christmas day, 2003.

The craft has sent back marvellously detailed pictures of Mars' surface, adding to our knowledge of the planet's geological history and evolution.

Most significantly, thanks to OMEGA (the mineralogical mapping spectrometer) it has found clays (see picture, mapping their distribution) - hydrated minerals that must have formed quite early in the planet's history, when Mars was still a wet place. The same instrument has also revealed great swathes of frozen water and carbon dioxide at the poles.

The craft's High Resolution Stereo Camera (HRSC) has spotted dustings of ice over the poles, mapped the slopes of the planet's giant volcanoes, and cast its gaze along the cracks, craters, and canyons that cover the surface.

For instance, the picture below shows the snow covered plains broken by towering cliffs some 2km high. Dark material in the caldera-like structures and dune fields could be volcanic ash, according to mission managers at ESA. 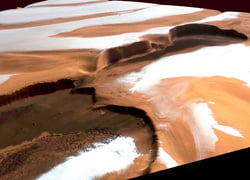 From its vantage point some 13,000 kilometres (give or take a bit) above the planet's surface, Mars Express has stripped back the top layers of the planet to confirm that if the ice at the poles melted, it would swamp the planet and create an ocean 11m deep.

It has also studied the atmosphere, thin and tenuous as it is, to build up a vertical profile of its composition and temperature, capture images of the highest clouds ever seen, and revealed the glow of aurorae at mid-latitudes. It has also caught the solar wind in the act of slowly ablating the atmosphere down to an altitude of 270km.

The mission has already been extended to 2009, and if everything still works, could be extended further into the next decade. ®