Updated When eBay rolled out the PayPal Security Key earlier this year, its executives hailed it as an important measure that would make users more secure. And it was. By generating a random, six-digit number every 30 seconds that users needed to authenticate themselves online, the small electronic token provided an additional layer of protection against phishers and other online criminals.

But according to Chris Romero, an IT administrator who has used the Security Key for several months now, a bug could allow phishers and others with bad intent to work around the measure. When accessing his PayPal account from merchant sites and other third-party destinations, he says, his account is validated when he types in any six-digit number, as long as he provides a valid user id and password and answers an accompanying security question.

That caveat - that he provide his login credentials and some pre-set security question - helps contain the damage that might otherwise flow the Security Key flaw. But this means the device does little to protect users when their account information has been phished or is otherwise known to others.

An eBay spokeswoman says company security people have been unable to reproduce the behavior. But Romero says for the past week he's been able to repeat the results on two separate accounts using two different computers - both of which he scans every day for malware, he says. He's also supplied us with 23 screenshots that walk us through the misbehaving security feature.

In a nutshell, here's how it works: Romero purchases an item using eBay's Buy it Now feature and chooses PayPal as his payment option. After clicking through several screens that include URLs related to both eBay and the third-party merchant, he arrives at a screen that requires him to enter his PayPal user id and password.

The following two screens - which we've reproduced below - require him to (1) enter his six-digit number generated by his Security Key and (2) answer a security question. He enters "123456," for step 1 and PayPal doesn't challenge it. After correctly answering one of his security questions, Romero's transaction is completed. 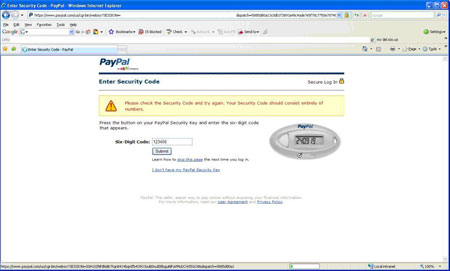 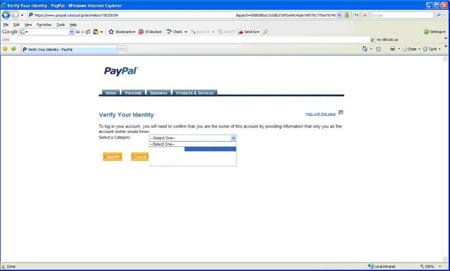 While acknowledging that PayPal still requires him to enter a valid user id and password and answer a security question, Romero says it's unacceptable that the Security Key isn't working as advertised.

"For someone who's paid money for a Security Key and is thinking their wife or brother can't get into their account because they don't have the key fob, they're thinking that my account is secure because it doesn't matter what anyone else has," he says. "They're not getting the security that they assume they have."

As we've said, eBay has been unable to reproduce the flaw. We'd be interested to hear the results other PayPal users get when they try.

The aforementioned spokeswoman said on Thursday that over the past 24 hours PayPal security people are now able to reproduce the bug and are working on a fix. As we noted above, she said the flaw shouldn't be regarded as significant security risk because users are still required to enter a password and enter a security question. ®