The European Space Agency's Venus Express probe has confirmed that there is lightning on our twin planet. This means that lightning has been confirmed on four of the solar system's eight official planets, but Venus' storms are unique. While lightning on Earth, Jupiter and Saturn is all associated with water clouds, the electrical discharges on Venus are from clouds of sulphuric acid. 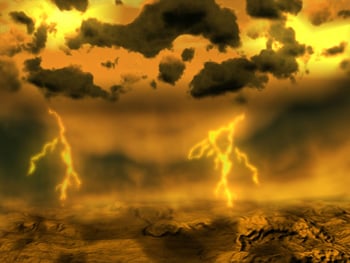 Artist's impression of a lightning storm on Venus. Credit: ESA

The finding forms part of a special report on Venus Express's primary mission in the 29 Nov issue of the journal Nature.

"In addition to all the pressure and heat, we can confirm there is lightning on Venus - maybe even more activity than there is here on Earth," said Christopher Russell, a NASA-sponsored scientist on Venus Express from the University of California, Los Angeles, and lead author of one of the Nature papers. "Not a very good place to vacation, that is for sure."

The mystery of Venus is that it should be more like Earth. The two planets are virtually the same size, and although Venus is closer to the sun, the distance is not thought to be enough of a reason to account for the startling difference between the two worlds.

With an average temperature hot enough to melt lead, thick, sulphurous clouds and a volcanic wasteland of a landscape, Venus, our twin planet, could not be much less like our home planet. And thanks to the rich stream of data being collected by Venus Express, we are starting to work out why.

Venus Express has confirmed that Venus' lack of magnetic field and slow rotation means that the solar wind has been stripping the atmosphere of water for billions of years. No water means no rain to wash the carbon dioxide out of the atmosphere, resulting in the so-called runaway greenhouse effect.

Professor Fred Taylor from the University of Oxford, a scientist on the mission, told the BBC: "It is now becoming clear why the climate on Venus is so different to Earth, when the planets themselves are otherwise quite similar.

"Our new data make it possible to construct a scenario in which Venus started out like the Earth - possibly including a habitable environment, billions of years ago - and then evolved to the state we see now."

Venus Express's primary mission is now completed. The probe will remain in orbit, scanning the surface of the planet for evidence of current volcanic activity, until it runs out of fuel. ®

Chang'e 4 wakes and Yutu 2 stretches its solar panels for another day... on the friggin' MOON

Venus also turns up a number of undiscovered orbital partners