'A crustacean with an amazingly minuscule brain'

The world-famous US Department of Homeland Security (DHS) is working on astounding handheld lobster technology which could let operatives "see through walls, wood, concrete, earth, and steel". Just like lobsters can. (Hold on ...)

An article in the latest DHS Science & Technology Snapshots newsletter entitled "Eye of the Lobster" unveils the new kit, which resembles a handycam with a pistol grip and bulging orange lens on the front.

The flip-out screen can apparently show the user any "humans and contraband" lurking "in hidden compartments" behind "walls of various thicknesses and material". 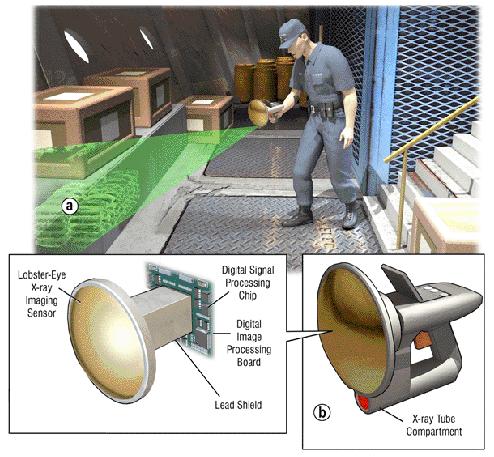 Here you have a crustacean with an amazingly miniscule brain, yet this creature is able to "see" through walls of dense water obscured by silt and sand... Lobsters have limited image resolution, but possess high sensitivity and the ability to detect fast movement and the polarisation of light.

Over eons, this bottom crawler developed compound eyes to view its world through a large number of long, narrow square-shaped cells, arranged in a spherical array with a 180° field of view. Any light the lobster takes advantage of down there is reflected from very highly reflective walls of the cells over a wide range of angles of incidence to form a fast focus.

Each cell captures that small amount of light, which then enters the lobster’s eye from all angles. The light from these cells is then focused to form a single, intensified image.

This is some eye-opening stuff.

There's simply no arguing with that. Apparently, LEXID™ comes from the labs of Physical Optics Corp of Torrance, California, who are building the kit under a Small Business Innovation Research (SBIR) grant. Everyone loves the DHS SBIR programme - especially non-US-taxpaying journalists - for the occasional innovations it produces, and even more for the almost constant flow of entertainment.

Physical Optics also plans to put the LEXID™ on a robot, of course, for use in detecting roadside bombs. The company is developing a number of other security-related techy products, including the WEARNET™ personal area network.

That said, it seems that "LEXID is still very developmental", according to Jim Apple of Physical Optics.

Evidently, the DHS is facing up to the problems which confront it and dealing with them. Depending on your viewpoint, you might say that the problem being dealt with here is what on Earth to do with all the federal security-fear pork rather than anything else, but only a very grumpy US taxpayer could really get angry about the crustacean-in-a-box see-thru scan beam.

Gerry Kirwin, who manages the project for the DHS, perhaps puts it best.

"Who'd have known we'd get our inspiration from lobsters?" he asked. ®