Budget pricing still doesn't put this brand on the map

Review Navigate with your Michelin sat nav as you wear out your Michelin tyres visiting destinations that you've read about in the Michelin restaurant guides. Will the new budget X970T put this brand on the sat nav map?

Most sat navs provide a list of points of interest (POIs) that will find you a petrol station easily enough, but sadly the restaurant POIs consist of long lists of fast-food outlets. We can't imagine travelling from A to B and making a stop-off at C to eat deli or Mexican - you're more likely to want to grab a sandwich or, if there's an hour spare, find a decent bistro or pub. You don’t exactly have to hunt too hard to find a fast-food joint on Britain’s high streets or highways, so the POIs on most sat nav units are less than essential, but we had high hopes for the X970T. 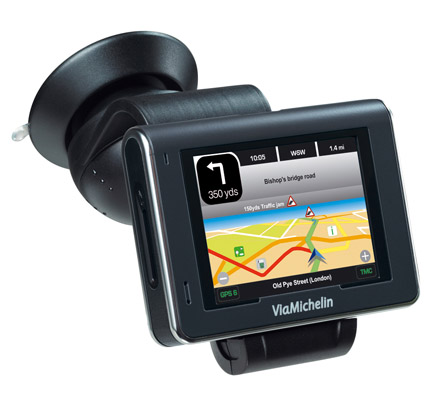 It’s a conventional 3.5in unit with de facto standard SiRF Star III GPS chippery and a 300MHz Samsung CPU that runs on the relatively aged Windows CE 5.0 operating system. However, the styling is refined, and the casing looks smart and feels solidly built.

The windscreen mount also looks the part and attaches the sat nav unit securely, though it can only be attached to the windscreen and not to the dashboard.

Via Michelin refers to the device in the specification and describes it thus: "Car mounting system: rotating base with a unique design for mounting to the windscreen in a simple quarter turn." True enough, but the problem is that it only works on a flat surface, meaning that it takes up a chunk of your windscreen and reduces visibility.

The power button sits on the curved surface on the top edge, and there's an SD card slot on the left. The various connectors are out of sight on the bottom edge. All of the controls work through the touchscreen, which can often be a problem when you’ve only got three-and-a-half inches of screen space.

Via Michelin has got this aspect of the X970T sorted, though, as most of the menus only present three or four buttons, which are nice, chunky and hard to miss if you need to change your way while you’ve got a few seconds at a red light.

When it comes to postcode and addresses, Via Michelin has managed to squeeze all of the digits and letters on to a single screen and, as an additional aid, the software greys out buttons that you don’t need.