Boeing has confirmed it will deliver the first 787 Dreamliner in November or December 2008, following a maiden flight early in the year.

The announcement comes a couple of months after the company knocked backed the 787 schedule by six months due to production difficulties. It had previously said it would deliver the first example to All-Nippon Airways by May 2008 following a compressed flight test programme.

Scott Carson, head of Boeing's commercial plane unit, admitted the manufacturer is still "ironing out significant supply chain wrinkles", but promised: "The schedule we revealed in October is unchanged."

To back up its assertion that all is proceeding according to the revised timetable, Boeing yesterday released a nice snap of the 787 production line: 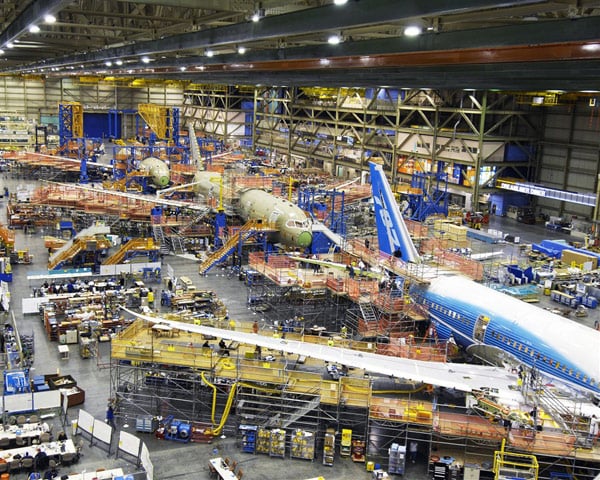 The blurb explains: "The Boeing production line is full for the all-new 787 Dreamliner, as work continues on the first flight-test airplane and two airplanes to be used for static and fatigue testing. This photo shows Airplane #1 in the third position, where final structure and systems installations are completed. Behind it, the static-test airplane is in the second position, where it will receive landing gear, engines, and any required interior installations. The fatigue airplane entered final body join 30 Nov."