Exclusive Orb is expected to announce that it's supporting Apple's iPhone and iPod Touch in the next few days. Orb provides access to your playlists and songs on your home PC (as well as photos, videos and TV) from anywhere. It's Sling without the hardware, with many users simply using it to access their home music collections at work.

On the iPhone and Touch, Orb is accessed through the browser. It wasn't as straightforward as that, however, since Apple stealthily blocks applications that use RTSP, the standard mobile streaming protocol. It will deliver your streams in MP4 instead. And this is what it looks like. 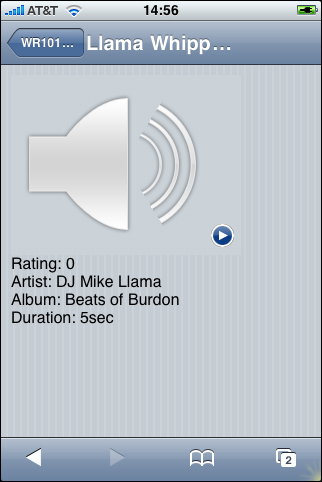 And here's the iPhone/Touch accessing the latest, Orb-powered version WinAmp. This version, which hasn't really been trumpeted, turns your home media player into a very limited kind of on-demand radio station for friends. 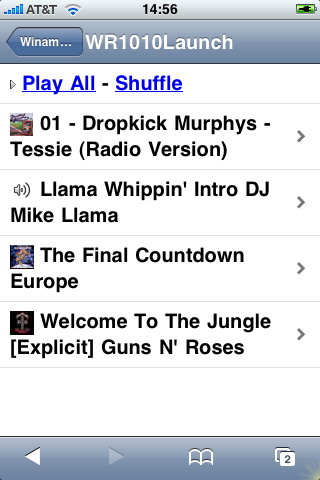 Orb on the iPhone: into WinAmp

With the iPhone, you can send a link to friends in an SMS chat session, which is how you play a song you just bought - but don't have on you - to a friend: 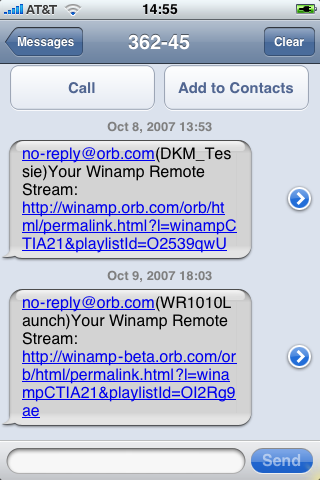 Why is this stealthy software company so significant? Well, for starters, it provides the kind of obvious-in-hindsight service that IP protocols are all about. Can you imagine a telco waking up one morning, thinking: "I know, let's give subscribers access to their home music collections - and charge nothing for it!"

"Place-shifting" offers an interesting contrast to the two great hypes du jour: User Generated Content with its mantra of "the user is in control", and "Software as a Service" (SaaS). Both have a grain of truth about them, but supporters to tend to miss the barn door by a mile.

There is NO media revolution from videos of cats falling down stairs: we do expect greater control of, and access to media we've already bought, however.

Similarly, SaaS is (again) being touted as the biggest revolution since Edison, but it's hard to envisage cheap local processing power disappearing when we have so much digital media to manipulate and juggle. What some SaaS services share with placeshifting services like Orb is that where the media resides just matters a lot less. As long as you can get to your spreadsheet/playlist, you worry less about carrying it with you.

But you knew all that already. ®