Apple has released updates for two widely distributed products that harbored a raft of security vulnerabilities, some of which were actively being exploited by miscreants. Unbelievably, the company isn't presenting either as a security fix to mainstream users despite the risk the bugs pose for its millions of users.

QuickTime 7.3.1 fixes at least three vulnerabilities. The most serious of them resided in the way QuickTime interacts with servers that stream music and video and gave miscreants the ability to completely hijack both PCs and Macs alike. According to Symantec criminals have been exploiting it for two weeks now by luring victims to booby-trapped websites.

The update, which was released Thursday, plugs two other holes, both of which give an attacker the ability to execute malicious code on vulnerable machines.

A day later, Apple updated its Java runtime software for Macs running earlier versions of OS X. Java Release 6 for Mac OS X 10.4 fixes more than a dozen vulnerabilities, at least one of which was publicly disclosed more than a year ago. Like many of the others being plugged, the hole gave criminals the ability to remotely control a user's machine. Users of Leopard, the OS X version released in late October, are not susceptible. 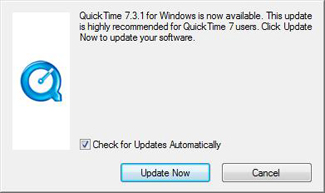 We fired up QuickTime on a PC and promptly received a popup window alerting us that the update "is highly recommended." But nowhere is there any mention of vulnerabilities that can be milked by a cyber criminal halfway around the world. We've yet to install either update on a Mac, but according to this post on Ryan Naraine's Zero Day blog, the Java update similarly omits any mention of security vulnerabilities. 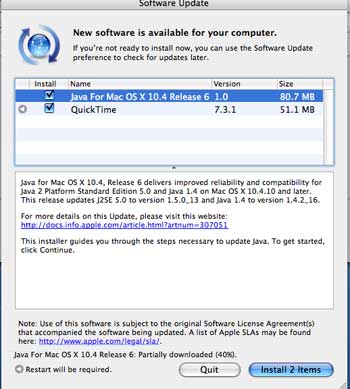 This failure to plainly warn end users is unfortunate. While techies who frequent publications like El Reg are likely to know about these critical security bugs, we doubt average Joes have any idea. How many mainstream users, we wonder, will blow off these updates because Apple is too proud to admit two of its products have security vulnerabilities?

Several reader comments have claimed there are factual inaccuracies in the above story. For support, these readers point to the security alert Apple provides for QuickTime 7.3.1 for Mac. It's great Apple is warning that it's latest QuickTime for Mac fixes security bugs. Two facts remain:

1) As the screenshot to the right makes clear, Mac users who don't read tech pubs have no reason to believe the latest Java update has anything to do with security. A reasonable person could read that alert and think there's no real rush in installing the patch.

2) The alert PC users get for QuickTime 7.3.1 similarly makes no mention of security issues. This omission is bad for the same reason.