Review Visual Studio is more than an integrated development environment. It is a strategic tool intended to promote the Microsoft platform.

As such, the latest version of this IDE - released to MSDN subscribers late last month and due for widespread availability next February - draws together several different themes. One is Windows Vista. This is the first release of Microsoft’s developer tools suite since the arrival of Vista more than a year ago, and is therefore the first truly Vista-ready edition.

Visual Studio 2008 adds designer support for three new frameworks released simultaneously with Vista in November 2006: Windows Presentation Foundation (WPF), Windows Communication Foundation (WCF) and Workflow Foundation (WF). These include two of the original “three pillars of Longhorn” touted by Bill Gates when he announced Vista - then codenamed Longhorn - even further back, in 2003.

Why has it taken Microsoft more than a year since the launch of Vista to deliver full developer support for the premier features of its latest operating system, whose features were unveiled four years ago?

It’s a good question, and one that exposes the split today that exists in Windows between the vision and the reality. According one view, WPF is the new graphical user interface (GUI) for Windows, replacing the old Win32 API, and WCF is the replacement for every communication API from DCOM to MSMQ.

On one level, it is easy to see how WPF improves on Win32. It scales nicely, it is designer-friendly, it runs both within and outside the browser, and it uses DirectX for rendering, enabling fast 2D and 3D graphics. In terms of tools, WPF - with the XAML language that defines a WPF GUI - is a bridge between Visual Studio and a companion product from Microsoft called Expression Blend.

Blend is a design tool for WPF, complete with an Adobe Flash-like timeline, and supports the same solution files used by Visual Studio. Designers and developers can work on the very same files, breaking the common cycle where an application is mocked up in Photoshop, then handed over to developers to implement in a different tool. Since WPF forms use a code-behind model similar to that in ASP.NET, there is a clean separation between code and design, though a determined designer could still break the code by deleting or renaming objects. 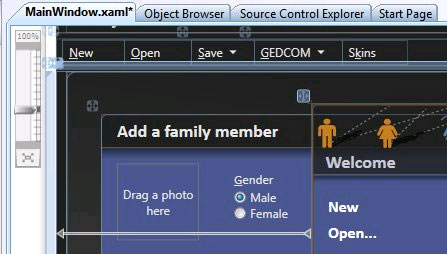 Get fancy with the XAML designer

Unfortunately - and here’s where reality kicks in - there are problems with WPF. It is part of .NET Framework 3.0, now updated to version 3.5 with the release of Visual Studio 2008, and although it is supported on Windows XP, deployment of the runtime is limited and the download is huge.