Team System for Visual Studio 2005 was a revolution for those developer teams that prefer to stick closely to Microsoft’s own development tools. They got grown-up source control, a unit testing framework, load testing, code analysis, bug tracking and team management through work items, build management, documented process methodologies, and a project portal based on SharePoint. 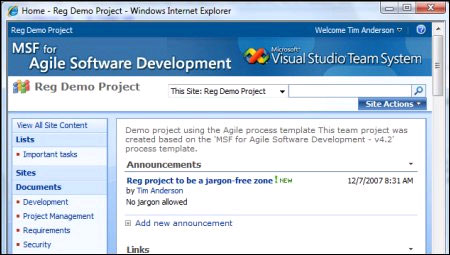 The 2008 version has matured a little, but the changes are relatively small. Installation of Team Foundation Server remains arduous, thanks to its many dependencies. Microsoft has not addressed weaknesses such as the difficulty developers have in tracking work items spread across several projects.

Earlier this year Microsoft acquired DevBiz, makers of TeamPlain, which is a web-based alternative to Team Explorer. This is not yet integrated into Team System 2008, so I guess it may be an add-on for later.

Still, there are numerous small enhancements here, like improved performance, new code analysis rules, new features in the profiling tools, and the ability to get the latest version of a file automatically on check out. The Database Edition is now integrated into the main release. Microsoft is known to be working on significant new modeling tools, but there is no sign of them in this release.

The quality of Visual Studio 2008 reflects its strategic importance. It is a fine piece of work, and essential for developers interested in keeping up-to-date with Microsoft’s platform. This edition is the first to be able to target multiple versions of the .NET Framework, so it should be the only one you need.

There are annoyances, like the seemingly perpetual cycle whereby what you really want is not quite done yet and only available in preview. Silverlight 2.0 falls into that category, as is Project Astoria, the forthcoming REST API for ASP.NET.

Visual Studio is also suffering from feature-bloat, and the full versions may be overwhelming to newcomers, though the free Express editions do offer an easy entry point. And, good though it is, Team System is only slightly improved in this version, which is disappointing. Team System also suffers from a bewildering range of editions. I feel that a single Team Suite would do nicely.

Visual Studio 2008, in a nutshell-shaped object: