It's time to synchronise watches, check diaries and make sure we're all up to speed on Intel's 2008 processor launch plans.

First make a note on 7 January that the chip giant will be formally unveiling its 45nm 'Penryn' mobile processors, part of what it calls the 'Santa Rosa Refresh' - an update to the latest generation of its laptop platform, more of which later.

All four chips have a thermal envelope of 35W, which matches current Core 2 Duo processors, allowing notebook makers to slot the new chips in without having to redesign the machines' thermal characteristics.

The fifth chip, the Core 2 Extreme X9000, consumes up to 44W when it's running at full, 2.8GHz pelt. It too has 6MB of L2 cache. They'll appear in notebooks branded 'Centrino' and 'Centrino vPro', the latter the successor to 2007's Centrino Pro brand. 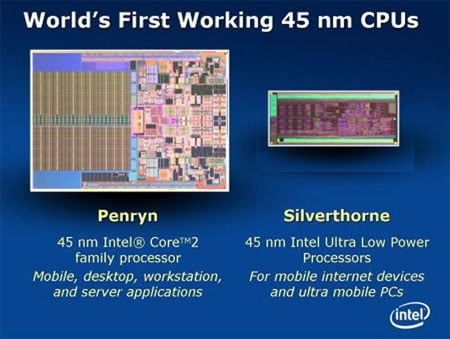 Alongside these will be the E8190, a version of the also arriving E8200 that doesn't support virtualisation or Intel's Trusted Execution Technology. The part will run at 2.66GHz, contain 6MB of L2 cache and sit on a 1333MHz frontside bus (FSB). Like the similarly specced E8200, it will consume up to 65W of power.

Missing from the latest Intel launch update summary is the Core 2 Duo E5000 series, low-end desktop chips that succeed today's E4000 line-up and which are expected to arrive in April. They're likely to contain just 3MB of L2 and operate on a 1066MHz FSB, putting them under the current 4MB L2, 65nm Core 2 Duo E6000 range.

Business-oriented desktops will feature the 'Core 2 vPro' logo, while mainstream models will ship under the 'Core 2 Viiv' brand, as per Intel's realignment of Viiv. So no more 'Duo' and 'Quad', as forecast, at least not at the system level.

Branding is less certain when it comes to Intel's Ultra Mobile Platform (UMP), launched in April 2007 and due for a major upgrade in the April-May 2008 timeframe. It's introducing 'Menlow' and its key component, the 45nm 'Silverthorne' CPU. Menlow will consume half the power of the current version of UMP and a quarter of what older, Celeron M-based UMPCs consume.