Douglass et al criticise earlier research that used a metric of uncertainty based on maxima and minima from simulations. This would seem a reasonable criticism, since conformity with observations could be obtained simply by running a simulation - any simulation - enough times to generate the outlying data points needed to cover the observational range.

"There is an enormous ongoing effort to find errors in the observations that would reduce the disagreement with the models. [Shouldn't that be the other way round? - naive ed.] Here, the task is daunting since the various datasets are independently constructed and one needs to find something wrong with each one of them".

In regard to the observations, they are more blunt. Reiterating the view that we must assume that the latest dataset versions are the best estimates based upon investigators knowledge and experience using the data, they say: "We agree: the values given are the values we should use".

Already, their conclusion - "that projections of future climate based on these models be viewed with much caution" - has raised their popularity with climate change bloggers.

Could something be missing from the climate models?

After the Bali Hai...

Accounts of atmospheric processes bearing on climate must take account not just of the "greenhouse gases", but also of clouds and aerosols - airborne particles ("particulates") from a variety of sources such as volcanos, industrial emissions, forest fires and wind-blown desert dust.

The influence of aerosols is particularly difficult to gauge, with even the IPCC admitting in section 2.4.4 of their Fourth Report that "The progress in both global modelling and measurements of the direct RF [radiative forcing] of aerosol leads to a medium-low level of scientific understanding."

(Radiative forcing is an index of the influence of a particular component, and may be positive or negative. Arriving at a global climate model entails additional steps to determine how they interact - and where they are). 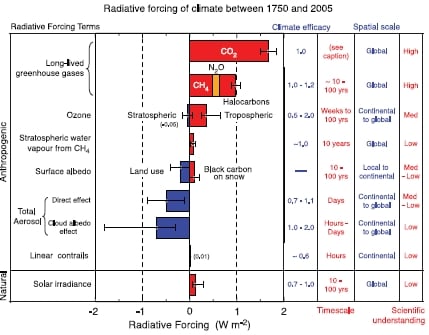 IPCC global mean radiative forcings, grouped by type, showing estimated uncertainties. Timescale (red column) estimates atmospheric persistence, were the anthropogenic cause to cease. The IPCC's assessment of the scientific understanding of each type is shown at right. (Note: aerosols are classified here as Anthropogenic. It is not clear if this includes or excludes aerosols from Natural causes).

It has been known for a long time that aerosols contribute to cloud formation, as solid particles can induce water vapour to condense onto them to form the liquid droplets that make up clouds. As the chart above shows, the IPCC considers that aerosols produce a "negative forcing". In other words, they inhibit the "greenhouse effect", and cool the climate.

But a study published earlier this year in the American Geophysical Union's Geophysical Research Letters journal by researchers from the Weizmann Institute and Goddard Space Center suggests that the picture is more complicated than hitherto foreseen. Dividing the atmospheric effect of aerosols into their wet and their dry effects, as the IPCC report does, has been an uncritical assumption so far.

It has been customary to give clouds a wide berth of 1 km when measuring aerosols, because of the confusing optical properties of cloud edges. But says lead author Ilan Koren of the Weizmann Institute, "After working with several years of data from the Moderate Resolution Imaging Spectroradiometer (MODIS) on NASA Terra and Aqua spacecraft, we consistently saw what appeared to be elevated levels of aerosols near clouds.

However, satellites are not the only sources of data. It was after Weizmann researchers switched their attention to the ground-based AERONET data that they discovered the full extent of what they were seeing.

"We found that the region affected by this cloud field 'twilight zone' extends to tens of kilometers beyond the identified cloud edge. This suggests that 30 to 60 per cent of the atmosphere previously labeled as 'cloud-free' is actually affected by cloud-aerosol processes that reflect solar energy back into space."

Goddard's Lorraine Remer, co-author on the study, adds: "What we think we're seeing is a transitional zone where clouds are beginning to form or are dying away, and where humidity causes dry particles to absorb water and get bigger."

So clouds are not what they would seem - what looks like clear blue sky may be a 'twilight zone', concealing processes of nascent cloud formation that need further scientific clarification.

Computer models may need to be revised to include the new finding. But what of the impact on scenarios of future global climate? Remer notes -

"Current estimates of the effect of aerosols on global temperatures, which is primarily cooling, may be too small because the large contribution from this transition zone has been overlooked."

Perhaps it's time for Reg readers to check they have their coats. But on both empirical and inferential grounds, then, the science of climate looks to be far from over.®

In the light of the Royal Meteorological Society's paper, it will be interesting to see if the BBC will revise its rebuttal of climate scepticism. In respect of item 5, under the heading 'THE ATMOSPHERE IS NOT BEHAVING AS MODELS WOULD PREDICT', the BBC confidently asserts that, "Within the uncertainties of the data, there is no discrepancy that needs to be dealt with."