How to copyright Michelangelo

From the Borgias to Bill Gates

Some of the world's greatest artworks are turning into copyrighted properties.Five hundred years ago, Michelangelo painted the Sistine Chapel ceiling. Today, those images are copyrighted. How can ancient cultural icons become commercial properties, centuries after they fall into the public domain?

How this happened is a story that takes us from a Crusading Pope in the Borgias era, all the way to Bill Gates' mansion on the shores of Lake Washington.

Michelangelo's frescos of the Sistine Chapel are icons of religious art, drawing visitors from across the world. In 1508, Pope Sixtus IV commissioned the work as a monument to the glorification of God and himself. It was the practice of the rich and powerful (particularly those like Pope Sixtus, having acquired his vast power by warring on Venice) to fund great public works of art, to cement their personal legacy.

The ongoing argument between the Pope and Michelangelo over the long-delayed completion of the work is almost as legendary as the paintings. Fresco painting is a laborious and difficult process. The color is applied to wet plaster, once the color is applied, it cannot be altered, so every brushstroke must be painted perfectly the first time. Michelangelo's work is considered the exemplar; every art student is expected to study these frescos and be familiar with his techniques and methods.

But time will ravage any work of art, and over the years, the Sistine Chapel ceiling leaked, minerals leached through to the surface, and soot from votive candles darkened the paintings. Several restorations were done over the centuries, repainting some damaged areas, and sealing the frescoes with transparent glue. But with as the glue aged, the surface became darker, and the original painting became colorless and lifeless. In the late 1970s, the Vatican decided the ceiling needed a total restoration. You can clearly see how the colors suffered, in this photograph of "The Creation of Adam," the blue sky has darkened and the figures have turned an unattractive color of brown. 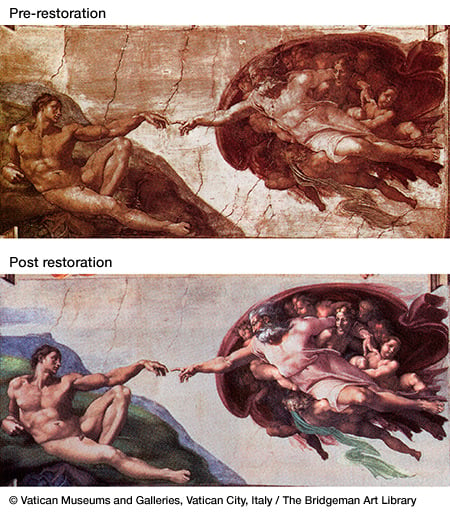 Modern restoration has a new philosophy: it is more about conservation than restoration. Every brushstroke by the original artist's hand must be preserved. If a damaged section of the fresco must be filled in, it must look natural but be clearly marked as restoration. Previous attempts at restoration must be removed and replaced with modern work conforming to the latest scientific standards. Nothing must ever be done that is irreversible.

So the Vatican consulted the Getty Conservation Institute, who were well experienced in the restoration and conservation of world cultural and archaeological sites. It was decided that the layers of glue over the frescoes would be painstakingly removed by hand, a square inch at a time. However, the plan immediately drew criticism.

Some art curators believed that when the original frescos were completed, Michelangelo was dissatisfied with the bright colors, so he toned them down by painting over some areas with a transparent gray wash of glue and powdered charcoal. But it was impossible to be certain, as the glue sealant layers by previous conservators could not be distinguished from any original layer applied by Michelangelo. The glue could be removed easily, but it was all or nothing.

The Getty institute countered that scholars had been studying the murky, darkened images for so many decades that they had gotten used to them, they believed the frescoes had always been that way, but the new restoration would reveal the work as fresh as if it had just been painted yesterday. Perhaps that fresh work was washed over with glue by Michelangelo the next day, but once the restoration was done, it would be impossible to ever research this issue again. After much debate, the decision was made to proceed and remove all the glue.

But the worst problem with this painstaking restoration was the expense. It would cost the Vatican a fortune. They issued a call for public sponsorship, the Japanese TV network NHK stepped forward with a proposal. NHK would pay for the restoration, in return for exclusive film and publication rights. Harper's Magazine writer Eric Scigliano's 2005 report "Inglorious Restorations" asserts that NHK paid between $3 and $4 Million.

The Vatican could only license the copyrights of a public domain work due to an old quirk of copyright law. The original artwork may be in the public domain, but a photograph of that artwork may be copyrighted as a new unique work. The photograph taken today becomes a new copyrighted work with new intellectual property rights. Museums often charge for photographs of works in their collection, and publication royalties provide a modest income stream to fund conservation.

This assignment of copyrights separate from ownership of a work is a long established practice, commonly used by photographers and artists. A photographer might sell limited publication rights to a magazine or book that wishes to print his images, but he retains the copyright for himself so he can resell the image to other publishers. Some artists reverse the process, selling ownership of a painting or sculpture, but retaining reproduction rights and copyrights so he can republish it in catalogs or magazines. Some works are licensed by the estate of the artist, accruing revenue to his heirs.

So the Vatican/NHK deal worked to mutual advantage.