Things are looking up for the World's Dumbest File Sharer, Jammie Thomas, who became the first American to go to court in a P2P case in October

A jury of her peers found Thomas guilty of copyright infringement and set a fine of $222,000 - but now she's been dumped by the person most responsible for leaving her in this predicament (apart from Jammie herself) - her attorney Brian Toder.

It was Toder who foolishly advised her to make a principled fight of the matter in court - thereby turning what would have been a $2,000 tax into a candidate for bankruptcy. And it was the sheer ineptness of Toder's defence strategy that led the jury to conclude she was taking the piss.

(The no nonsense, blue collar jury resented having their time wasted, they later revealed).

Now Toder, who was working pro bono, is cutting his losses and will no longer represent Jammie. P2P site TorrentSpy notes that Toder was a maritime law specialist and describes his performance as "a frankly lacklustre non-existent defense".

The news was announced over Christmas on the website Thomas has set up to sell merchandise to raise money for her defence fund.

Here you can buy a Jammie Thomas thong (illustrated below) to help fight the good fight. No, they don't say "World's Dumbest File Sharer" - but like a good PC, they do appear to have plenty of room for expansion.

And who says P2P file sharers are mean spirited philistines who don't like putting their hands in their pockets? Free Jammie has raised $1,189.57 in the past nine weeks alone. 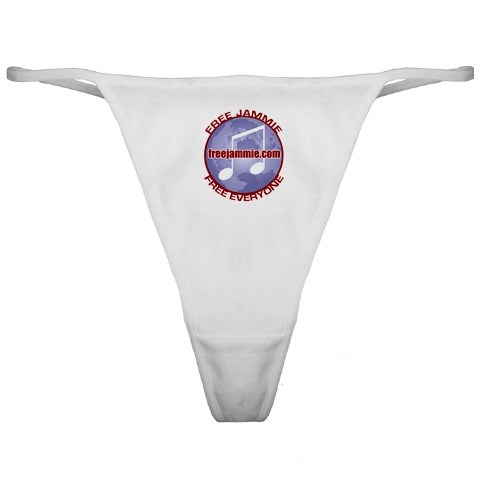 The Thomas case surely marked a low point for both sides in the P2P wars.

In failing to urge its members to license the free flow of digital music, the Recording Industry Ass. of America has created a punishment where none need exist: while its policy of suing users hardly helps its moral cause, that artists and creators deserve to be paid. And as the dispute has dragged on, file sharing has only increased. Thanks to BitTorrent, it's now common practice to download entire career worths of work, not just the latest Britney.

On the other side, can there ever have been a more empty and worthless cause than fighting for the right for artists not to be paid? I suspect that one reason for the lack of popular support for Thomas may be that when it comes to getting stuff for free - we've never had it so good. With so much cultural material available for nowt over the internet, only a sentimentalist or the chronically impatient net user ever has to pay for anything again. And the price for this is merely an ever-falling broadband fee.

As I suggested last year, most people share files, but we have about as much chance of being "taxed" as we do of being hit by lightning. Many of us would happily pay a broadband fee to legalise this mess. No wonder so many P2Pers have decided that keeping a low profile is probably the best thing to do.

(Even CNet's favourite lobby group, the EFF, has failed to come to Jammie's aid).

The futility of the litigation made me as popular with the phonographic industry as it did with people who have RIAA bumper stickers - but sometimes you have to call it like you see it. ®