Hundreds of US fighter aces reassigned as drone pilots

Rise of the machines

The recent surge in use of remotely-controlled robot aircraft by US forces for the Wars on Stuff has meant that substantial numbers of American pilots are now being pulled off normal flight status and assigned to drone-driving duty, according to reports.

An AP article revealed the trend on Wednesday. Many current American robo-craft require a fully-trained pilot at the controls at all times: examples include the well-known Predator, its bigger brother the Reaper, and the large high-flying Global Hawk. 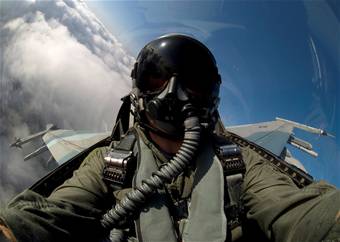 As the drones can often stay aloft for many hours at a stretch, pilots typically have to work in shifts so as to avoid tiredness. There is often a requirement both for pilots at the robot base in the theatre of war - to handle landing and takeoff - and further qualified aviators in the USA, who handle the aircraft by satcomms during missions.

All this means that piloted drones actually demand more personnel than normal aircraft. According to AP:

For some Air Force pilots, that means climbing out of the cockpit and heading to places such as Nellis Air Force Base in Nevada, where they can remotely fly the Predators ... About 120 Air Force pilots were recently transferred to staff the drones ... Some National Guard members were also called up ... more will be doing that in the coming months, as the Air Force adds bases where pilots can remotely fly the aircraft. Locations include North Dakota, Texas, Arizona and California, and some are already operating.

The move from lonely impulses of delight and tumults in the clouds* to sitting at a screen like a videogamer may not be all that popular among military aviators, who normally see themselves as practical, physical, warrior types - not computer nerds. 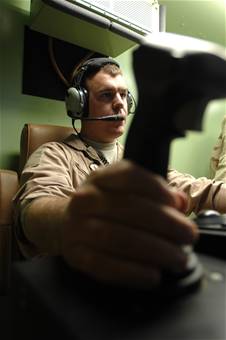 Remember Slipping the Surly Bonds [of Earth]? Forget It! ... I'm wondering what happens to the morale and career motivation of an [F-15] Eagle** driver who suddenly gets the nod to be Drone Boy. Imagine hanging out in the ready room, wearing your speed jeans [G-suit] and talking with your hands, when someone taps you on the shoulder and hands you a joy stick. No more strapping into an ejection seat. No more touching the face of God. Just a cinderblock building and a video display.

This may not be a problem for long, as the US Army - as opposed to the Air Force - doesn't seem to see why droneboys should be former flyboys with meatspace flight hours at all. It already allows ordinary ground troops to operate small, unarmed robocraft, and has plans to let non-pilots handle Predators too.

As time goes by, some military jet aces may come to think themselves lucky if they can land a job at a screen in a cinderblock building.®

*From Yeats' poem An Irish Airman Foresees His Death, in which the World War I flier protagonist opines that air combat is the only thing worth doing:

**The US F-15 fleet is grounded just now following the structural failure of an Eagle during air-combat exercises. F-15 pilots might thus be likely Drone Boy candidates; doubly humiliating as the F-15 was until lately the premier US fighter and these flyboys will have seen themselves as an elite among their fellows.