Circumventing DRM to make copies for personal use will remain illegal for consumers, under copyright reform proposals floated by the UK government today.

Lord Triesman, the Parliamentary Undersecretary for Intellectual Property And Quality (to give him his current title), introduced a touchy-feely 90-page consultation paper that's so touchy and so feely, there are far more questions than answers.

But that's understandable, given that this is only the first of two consultation exercises slated for 2008. A second consultation will hone the details before legislation is introduced: the timetable envisages this passing in mid-2009.

(These things take time: eight years elapsed after the mass adoption of the VCR before research libraries and other academic institions were allowed to record TV programs legitimately.)

The government proposes relaxing copyright enforcement for research and education purposes, to enable distance learning and whiteboard tuition. A related proposal will allow libraries to make a copy for archive purposes where the copyright holder can't be found.

The government also proposes creating an exemption for the purposes of "caricature, parody or pastiche".

This simply puts case law as it stands today onto the statute book. Following the Williamson vs Pearson case of 1987, a parody is regarded as infringing if it is substantially derived from the original. The proposed change suggests a parody will not be regarded as infringing if "it is not substantial", either. So you won't be able to take Stairway To Heaven, add the sound of a raspberry to the end, and claim it's your own work, and avoid paying publishing royalties to Messrs P&P.

Speaking at the launch today, Lord Triesman said it made no sense to prevent someone making a playlist for use in the car from material they had legitimately purchased.The draft floated today does require that consumers should retain the original media. 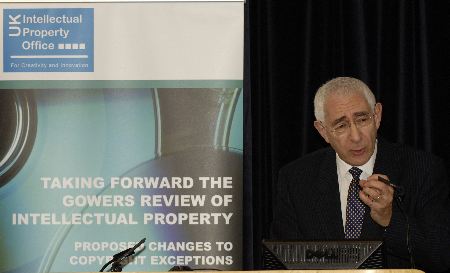