US motor heavyweight GM is determinedly presenting itself as a technological innovator ready to break with its old-school, big iron image. The car colossus' CEO, Rick Wagoner, has been giving speeches and briefings in recent days boosting his firm's efforts in development of new, greener prime movers and radical electronics.

The flagship of GM's shiny-kit push is the new Cadillac Provoq concept car. The Provoq's primary power is provided by a hydrogen fuel cell; like most such vehicles, it adds a substantial battery to deliver decent acceleration and hill-climbing performance. The battery gets topped up from the fuel cell during times of lower power demand, as when coasting downhill or sitting stopped in traffic. 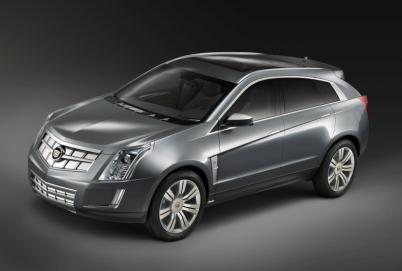 Provoq. We may not be running out of oil, but

we're damn sure running out of car names.

The Provoq adds a few new bells and whistles to the standard hydrogen-car configuration. There is an option to charge up the battery overnight from a wall plug, and GM reckon the car can go 20 miles on battery juice alone before the fuel cell needs to fire up. There's a small rooftop solar panel, too, but GM say this is only of use for helping power minor electrical gear such as the interior lights - it would take forever to charge up the drive battery.

Regarding greenness, the Provoq taken by itself is clean as a whistle, emitting only water vapour. However, its hydrogen fuel is effectively a way of storing energy from other sources. At present hydrogen fuel is made by reforming natural gas, a process which releases large amounts of CO2 and is highly inefficient. It would be less carbon-intensive, and considerably cheaper, to simply run vehicles on liquefied gas.

The idea of such cars, however, is that in future hydrogen might be made by using electricity to crack water. When asked where this electricity would come from, motor execs - knowing that it isn't their problem - usually speculate that it could be generated by renewable means such as wind or solar. This would be a lovely clean, green system.

Sceptics point out, though, that most estimates suggest renewables can't meet existing electricity demand - let alone provide loads more juice to make hydrogen. (Even Greenpeace projections don't suggest that renewables could yield better than 50 per cent of world energy needs by 2050, and they need to assume a lot of "smart use of power" - eg, not using as much - to get this figure.)

Thus the "hydrogen economy" is one in which a lot of new power is available from something else - perhaps some form of nuclear generation. But the sort of customer who might pay big money for a green car is often uncomfortable with nuclear power, so GM aren't stressing that aspect of the Provoq.

The company has some other ideas up its sleeve, anyway. Unlike the Provoq - which is just a concept and isn't offered for sale - the company's so-called FlexFuel vehicles can actually be bought. Even better, they don't cost much more than regular cars.

When GM use the term "flex-fuel", they mean that a car can run on E85 ethanol, or ordinary petrol, or any mixture of the two*. Ethanol is made at present from food crops, like corn. Its production currently involves a lot of fossil power, too. As things stand, powering transport with ethanol would drive food (and probably booze) prices sky-high - perhaps starving a lot of people round the world. There's a lot of doubt as to whether enough cropland actually exists, especially if a lot of the biofuel must actually be used to power the production plants.

So ethanol isn't green yet, any more than hydrogen. But it might be in future, if processes to make it out of agricultural waste or biomass not requiring prime farmland - even saltwater algae, maybe - can be made to work.

For now, ethanol isn't just un-green - it's also pretty hard to find. GM's Wagoner told reporters yesterday that customers who have bought his FlexFuel cars are complaining furiously about the lack of ethanol pumps.

"It has been remarkably difficult," said Wagoner of efforts to get E85 onto the forecourt. "We've been doing more work than I thought we would need to."

GM isn't actively pursuing other kinds of green-motor tech at present. It famously ran a large trial of a fully battery-powered car, the EV1, in California, but subsequently recalled all the test cars and binned the design. This led to many wild-eyed allegations of a sinister big-oil/big-iron conspiracy, but Wagoner says that the EV1 simply ran its battery flat much too fast.

"If you want to drive around and not worry... that hasn't worked yet," he said.