It's the end of an era

On Monday, Sony BMG announced it was lifting DRM from its digital music, but only through a gift card service called Platinum MusicPass, which was available through bricks and mortar retail channels. Amazon wouldn't have any such shenanigans, and cut the strings Sony had attached.

The move gives Amazon a clear competitive advantage over its rivals Rhapsody and Apple's iTunes store. Rhapsody's songs are tied to Windows DRM, while the only portable player that supports Apple's DRM-protected songs is Apple's own iPod.

(Strictly speaking, there's a tedious workaround which allows you to burn the song to CD, then re-import it as an MP3 that sounds even worse than the original - but nobody bothers).

So farewell then, music DRM. You were a stupid idea and we won't miss you.

The end came quicker than anyone had expected. Just eight weeks ago 7Digital predicted - to hums, buts and maybes - that DRM would disappear from digital music by this summer. Now everyone is embracing a DRM-free music future.

Well, almost everyone. Curiously, Boing Boing has yet to announce the death of DRM music. Google returns 42,000 results for a search on "DRM" at the blog, but the end of the DRM era has passed without comment. 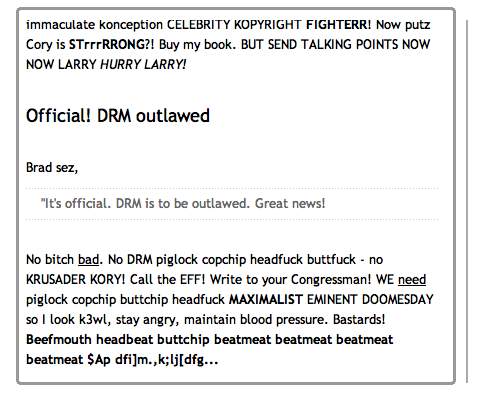 Prophetic: a Boing Boing parody from 2005