It was the MacBook Air sub-notebook

Macworld Expo For once the rumour mill was right. "There's something in the air," said Apple CEO Steve Jobs. And then he hit us with the MacBook Air. It’s aluminium, has black keys, is super, super thin, and Steve held it easily with his fingertips. 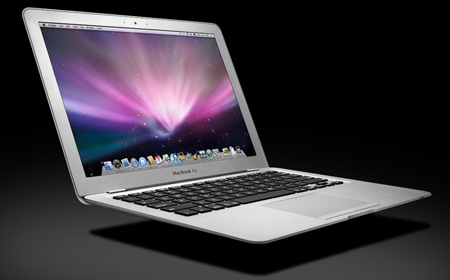 “It’s the world’s thinnest notebook,” he went on. It has a 13.3in widescreen, LED backlit display that’s instant-on. It also has a built-in iSight camera, a full-sized, back-lit keyboard, and a trackpad with multi-touch gesture support. 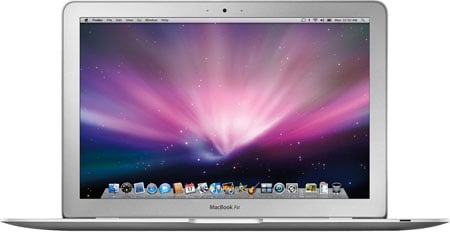 The Macbook Air packs a 1.6GHz Intel Core 2 Duo processor with 4MB on-chip shared L2 cache running at full processor speed, though a 1.8GHz upgrade will be available too. All Airs come with 2GB of DDR 2 memory as standard. The 1.6GHz model comes with a 4200rpm 80GB hard disk drive, but the faster Air has a 64GB solid-state drive.

The port array runs to a MagSafe link on the right side, and a USB 2.0 port, mini-DVI connector and a headphone socket on the left, all three under a flap. Want an optical drive? That's an extra $99 for an external unit, though the Air can make use of drives fitted into other Macs. The Air ships with adaptor cables with full DVI and VGA ports on the end.

With 802.11n Wi-Fi on for browsing the web, you get five hours of battery life, Jobs claimed. Bluetooth 2.1+EDR is part of the package too. However, the battery is sealed and is not user replaceable.

The a new MBA battery will cost $129. And the installation is free, but you'll still have to hand over your machine to Apple until they can get the new battery installed.