The struggle among motor-industry biggies regarding who can seem the greenest (while simultaneously not actually doing very much about carbon emissions) continues. Toyota and GM are vying for supremacy in the plug-in hybrid stakes, Ferrari has dipped a toe in biofuel, and out of left field come French and Indian contenders with a car powered by compressed air.

As regular Reg readers will be aware, a hybrid car is one with both a conventional engine and a battery. Electric motor-generators permit the battery to drive the wheels, to charge itself up by braking, and to be charged by the ordinary engine while stationary or coasting. All this means that the petrol/diesel (or fuel-cell) engine can be smaller than would otherwise be required for decent performance, and can be run in a more fuel-efficient, less polluting manner. 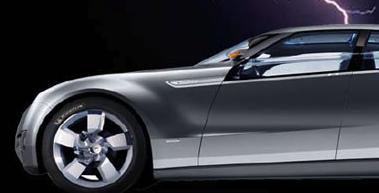 The Chevy Volt. Nuclear powered in France; runs on coal in America.

A plug-in hybrid is one in which the battery is large enough that it can drive the vehicle a useful distance without help from the engine; very few such cars are presently on the road. The plug-in, as its name implies, can thus take power from the electrical grid while stationary and use it for short trips. In the case of a short commute where the car could plug in at home and at work, it might not burn any fossil fuel at all on most days, emitting no carbon.

Toyota, maker of the famous Prius - the world's first mass-market hybrid - has previously pooh-poohed plug-in, saying that in the US (where grid electricity comes largely from burning coal) a plug-in car is effectively a very inefficient and dirty coal-powered one.

However, many green motorists aren't terribly concerned about ultimate sources of energy, and there has long been vocal lobbying for a plug-in Prius. Some green-tech fanciers - for instance Google - also contend that plugged-in car batteries could help the grid deal with demand surges, so preventing fossil fuel burn in standby generation plants.

Reports from the Detroit Motor Show indicate that the firm may be yielding to the pressure. Another factor in the firm's deliberations may be US motor behemoth GM, which has stated it will have its planned Chevy Volt plug-in hybrid on the market in 2010.

Electric-drive cars can deliver very nippy acceleration (though less so when they must haul a fossil engine about too). However, even battery supercars like the troubled Tesla Roadster don't offer the same kind of top speed as similarly-priced petrol machines. Roadster drivers, when they receive their beta-test cars, won't be able to keep up with a slightly cheaper Porsche 911 Carrera S.