Review Nick Carr's weblog is one of the rarest things on the web: intelligent technology criticism that you'd actually want to read for pleasure. He's an elegant writer with a waspish wit, and I've a special reason for seeing him prosper.

Back in 2002 I was living in San Francisco, a city that was in the depths of recession, when I first noticed the stirrings of the next wave of hype. Hope springs eternal, they say, and the Bay Area's unemployed web monkeys, technology prophets, and a gaggle of marketing and marketing consultants - who had all been having a jolly good time until quite recently - began to figure out how to construct the next bandwagon.

The result is another web mania gripping the media. This one isn't quite like it's predecessor, however.

The "Web 2.0" affliction of has so far only infected the media and political classes, with isolated outbreaks in marketing and the social sciences. (Naturally, you'd expect something created by ad consultants to hit ad consultants hard, but I didn't expect the London media to fall for it the hardest.) But where it strikes, it seems to take over the unfortunate victim's entire brain; and that's still a lot of people with public policy influence. The zombie symptoms of the virus we all know today: gibbering about "new democracy", "wise crowds", and the rational faculties of a three year-old.

For three years I found myself the only journalist chronicling such phenomena as the new democracy that wasn't, or the paradigm-shifting business revolution that couldn't make money, or the global intelligence that was easily outwitted by trinket salesmen, or the encyclopedia that destroyed Universities. This was the Dawn of a New Punditocracy.

I fortunately had lots of help from readers, who've coined many of the pithiest descriptions of the web bubble. Lots and lots of help. The Reg readership includes a lot of people who implement technology, and then have to keep the systems running - and the distaste is quite visceral. (Most of you have rumbled quite early on that this web hype was presentation layer people trying solve system level problems, all the while hiding behind a lot of New Age marketing guff).

Pointing this out made me hugely unpopular with a small number of people (who'd figured out that these tools and processes could so easily game the media, promote their agenda) who naturally resented the lid being lifted. But this all-sweeping utopianism needed many more hands to pry apart. For the past two years, Nick Carr's RoughType blog has done that job with style to spare. 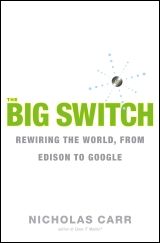 The Big Switch is Carr's second book, and is the first serious examination of "Web 2.0" in book form. It's a good companion to Steve Talbott and Clifford Stoll, lone critics of the first dot.com hype, and beautifully written. Its target market is people who don't read the blog (or El Reg, probably), and so are in particular need of a sanity check.

But The Big Switch is deeply frustrating, however, because it's really two parts of larger books.

The first part takes the form of a literary conceit: it's an extended essay comparing the build out of the "world wild computer" to the commercialization of electricity, and the creation of the electric grid. The rest of the book looks at the social and economic consequences of this ubiquitous computing facility - and that's where much of the best insight lies.

The first thing you'll notice is that the two part-books don't really need each other. By Chapter 7, when the second book gets underway, you'll be wishing that it was much longer and involved. It's in this part of the book that Carr discusses the consequences of the web that are generally overlooked. We know from RoughType that Carr has an impish eye for the revealing detail - with other authors you wish they'd done the research, or drawn the connections, but from RoughType we already know he has.

But getting to Part Two first involves negotiating Nick's Edison analogy. How well does this hold up? Carr reminds us that the creation of the electric grid created new industries such as sound recordings; it lit cities, it made possible refrigeration; new cities were created from the inventions of electricity. It was a dramatic chapter in the industrial revolution. Could the ubiquitous computer grid do the same, asks Carr, before predicting:

"The future of computing belongs to the new utilitarians," he writes.

But the metaphor doesn't work if you view digitization as simply the latest chapter in the "electricity revolution", just as electricity was part of the industrial revolution. We expect too much from a metaphor if we ask it to stand alone. For example, we already think it almost quaint that music came in physical containers - rather than on tap. It's possible to argue that this was a historical blip. But the mass production of sound recordings, and the low cost sound reproduction devices, began with electricity. You can argue that there's a continuum here, rather than a history punctuated by revolutions.

Then there are more practical objections to this all-sweeping metaphor.