Review Originally known as the '$100 laptop' from the One Laptop Per Child (OLPC) project, the XO laptop is now available through retail. I bought one under the Give One, Get One program where for a $400 donation, OLPC would send one XO to the donator, and another to a child. This is my story of working with it for a couple of weeks.

Opening the laptop was the first challenge. Being an IT professional - I'm a system administrator - I decided I didn't need to read the documents, and was promptly stymied by an inability to get the laptop open. A Google search revealed what the document I had tossed aside without reading showed: to open the laptop, first swing out the antennae, and open it from the opposite side of the handle. This may sound easy, but the majority of people who tried to open it weren't able to do so without being shown how, either. 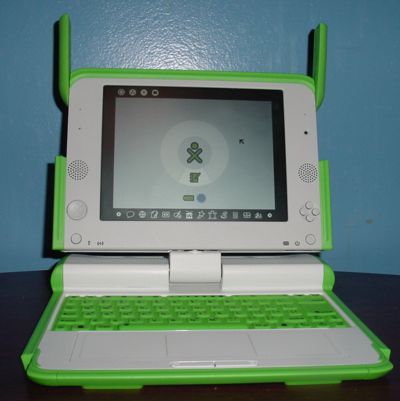 The CPU is a Geode LX-700 from AMD running at 433MHz, with 256MB Ram and a 1GB built-in Flash drive. There are three USB ports, plus microphone and headphone jacks on the sides of the screen, and an SD card slot on the underside. Accessing the SD slot is a pain that requires pivoting the screen 90° and then turning the laptop over. The XO has Wi-Fi, but no Ethernet port. I found the speakers to be loud but more tinny sounding than those on, say, the Asus Eee. The XO also has a built-in 0.3-megapixel quality webcam.

The screen is 7.5 inches wide, and has two modes: indoor backlit color and outdoor black and white reflective. The backlit mode gives 800 x 600 resolution, and the outdoor 1200 x 900. The monitor pivots around for 'eBook' mode, and a button on the front rotates the screen 90° with each push. The game key pad and buttons double as page up/down and cursor movement keys. 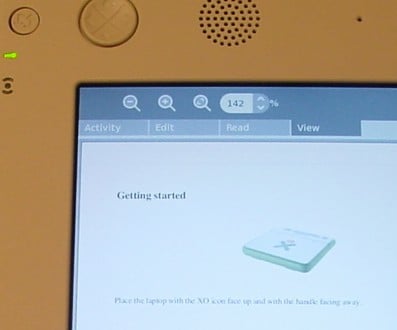 The keyboard is small - this is a kid's laptop, after all - but it is still bigger than many devices where adults need to enter text. The keys are rubberised, and there is enough space between them to (usually) avoid hitting the wrong one. Touch-typing is slow, but possible. Using three fingers on each hand for all but the edge keys worked pretty well.

The layout is good, with the enter key being four times the size of most keys, and the erase being twice as large. There are no Caps Lock or Delete keys, but holding FN and backspace will delete to the right of the cursor.

The XO Laptop's keyboard
Click for a wider view

The unit is totally silent. The lack of a fan and spinning hard disk, combined with the silence of the rubber keyboard, makes for a strangely quiet computing experience. The XO also runs cool, with the back of the screen becoming only slightly warm after hours of use, while the base remains room temperature.

Next page: Battery and boot-time
Page: