This Old Box We're shrinking away this week from monolithic supercomputers with This Old Box for something a little bit smaller. In fact, we'll be looking at the world's first commercial full-color portable computer. Fantastic!

But first, some insight into our computer selection process:

It's twofold this time - 1) The system was requested by a reader and 2) having a good chuckle about the size of "portable" electronics made over two decades ago is easy work. It's journalistic cruise-control for a tech hack, just like being indignant about violent rap lyrics is writing ambrosia for curmudgeonly columnists in your local paper. Not Pulitzer material, but always solid gold.

Time-tested tools of the trade stick around for a reason. One wouldn't roll their eyes at an engineer as he pulls out a ball-peen hammer. (And not only because one doesn't want his kneecaps throughly peen-ed. Engineers have short tempers.)

So no complaints. Let's grab our fish and barrel and head to the Computer History Museum in Mountain View, California. Oh ho ho! Would you look at its size!?

Five years after Commodore International released the Commodore PET (much to the delight of those seeking a Personal way to Electronically Transact everywhere), the company struck gold yet again. It was the Commodore 64 — widely considered the best-selling personal computer of all time. It was fast and cheap with a show-stopping 64 kilobytes of RAM.

But could a customer heave it into their hotel room? Could a person play Archon in stunning 16-color while lounging shirtless by the pool?

No, Commodore was forced to admit. A person could not do these things. Yet there was a conspiratorial twinkle in its eye as it made this admission. For at the Consumer Electronics Show in 1982, the company unveiled the Commodore Executive 64, the first color portable computer! 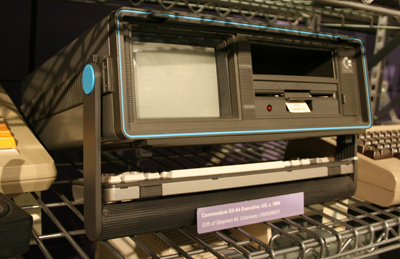 It weighed 23 pounds (10.5kg), had a built-in 5-inch monitor, a detachable keyboard, 64KB RAM, and space for one or two 5.25" floppy drives. When the system was available in January the next year, it was renamed the SX-64 and included only one 170kB disk drive plus an empty cartridge port. The price was a steep $995. 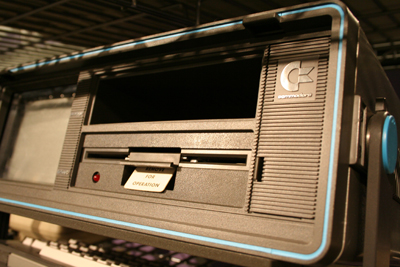 A hole in my heart, the size of a floppy

The SX-64 was essentially a "luggable" Commodore 64. And that perhaps was the problem. At the SX-64 release, the extremely popular C64 was selling for only between $200 and $230. That's about four times cheaper than the SX-64 was. Its only major advantage was portability, and a 23-pound suitcase-sized machine does stretch the definition a bit. On top of that, it didn't have a battery so it still had to be plugged into an AC outlet. And the screen was... well, let's face it, 5 inches isn't much to look at. 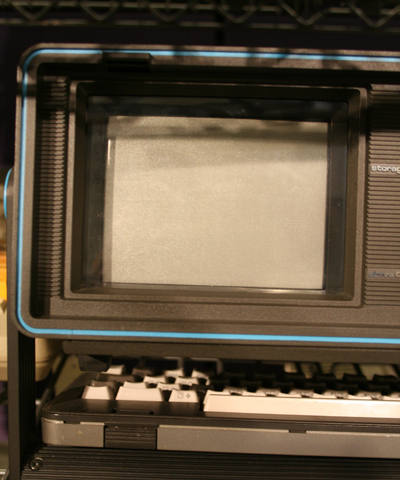 Hunch over and squint if you love SX-64s

The system was almost completely compatible with the C64, although it lacked a cassette port. The OS had a cosmetic change of reversing the C64's white text on a blue background to blue text on a white background to make things easier to see on the tiny screen.

As you might imagine, the SX-64 suffered from very slow sales. The poor girl was put down for good in 1986. But hold it, buckaroo. Let's not be too hard on the misbegotten SX-64. Are portable computers that much better off today? To answer that, we'll take a modern portable computer completely at random and compare.

The wheel has landed on the MacBook Air. It's an ultra-thin portable announced only this week at MacWorld. I haven't been paying attention — surely you can't get any more modern than this thing. Let's look at the features: 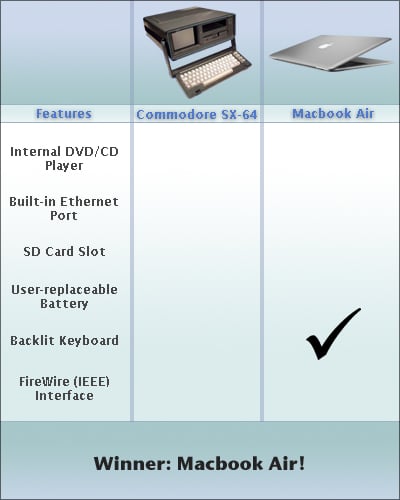 According to the highly judicious benchmarking above, the systems are practically the same. I'll give a nod to the MacBook Air because I'm a sucker for superfluous lights in a machine. You should see me in a data center.

Despite its faults, the SX-64 is a sweet system. There's no shame for it not being able to keep up with the Commodore. Nobody could. Well, maybe this guy: 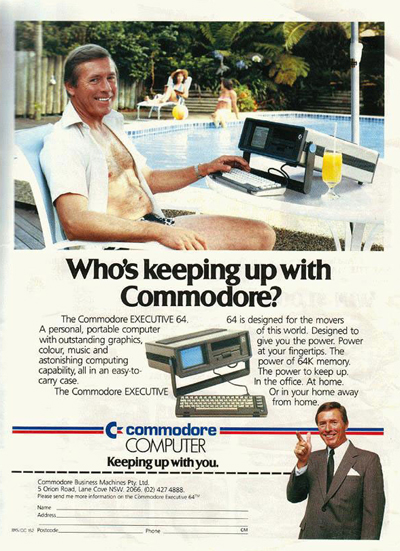 He's SO keeping up with the Commodore

Now it's time to turn things over to the most interesting part of This Old Box: the comments. Share your memories and gripes if you got 'em. How's your lumbago from carrying this baby around? What was your favorite mixed drink to sip while using the SX-64? Were you able to power the system via magic like the guy above? We need to know! ®