Asks Supremes not to save changes

Centered in court documents is WordPerfect, an ill-fated word processing suite that once controlled about 50 per cent of the market in 1990.

Novell only owned the software title briefly. It purchased WordPerfect in 1994 and sold it to Corel just two years later. But, during that time, the company claims it received a monopolistic squeeze from Microsoft that killed its chances at unleashing office productivity upon workers everywhere.

Microsoft has tried twice to quash the lawsuit since it was filed in US District Court in Maryland in 2004. Microsoft's first motion to dismiss was denied there, as was its second attempt with the US Court of Appeals.

Microsoft filed a petition for a writ of certiorari (legal latin meaning, "nuts to those lower court jokers") with the US Supreme Court on January 11. The court will be required to respond by February 11.

Novell's case asserts that Microsoft maliciously withheld technical information about Windows 95 to give Microsoft Office an advantage over rival software. The case is based on the federal antitrust suit in which Microsoft paid out nearly $5bn to settle damages with the likes of Sun and RealNetworks.

But the software giant claims Novell's particular case is unjustified because Novell wasn't selling an operating system at the time, and therefore, not in direct competition. Novell counters that because its software was multi-platform, it offered any competing operating systems a popular word processing application to help break the Windows monopoly.

When Novell purchased WordPerfect in June 1994 for $51m, it began the process of integrating the software into its own Novell productivity suite for the upcoming release of Windows 95. The company claims Microsoft deceptively "evangelized" the benefits of using integrated browsing extensions with Explorer in the early stages of WordPerfect and Windows 95 development. Novell said it devoted - with Microsoft's encouragement - significant resources to make sure browsing extensions were tightly integrated into its software.

But when the public test version of 95 arrived, Microsoft had removed the programming interfaces and withdrew documentation of browsing extensions. Novell claims to have evidence the change was malicious. 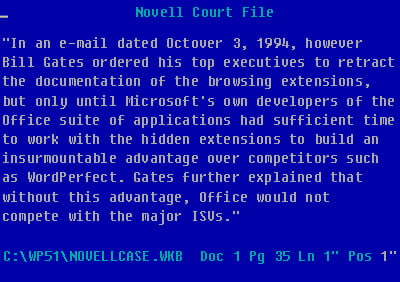 As a result of the alleged switcharoo, Novell had to delay the release of WordPerfect for Windows 95. The impact of the change was catastrophic. According to the company "in many instances, a user literally could not open a document he previously created or saved." Novell said it took another year to provide a workaround with the same functionality. And it claims that Microsoft developers had access to integrated browsing functions all along.

When Microsoft released the retail version of Windows 95 and Office 95, the company "changed course" and again offered documentation of the programing interfaces. This voided the alternatives Novell spent an entire year developing when the company said WordPerfect needed to enter the market. It also made Novell spend more time designing basic functions of WordPerfect all over again.

On the day the lawsuit was filed, Microsoft blamed WordPerfect's downward spiral on "poor business decisions" and "mismanagement" by Novell. ®