The gobbling-up by Oracle of BEA, the last significantly-sized independent middleware vendor, is another sign of the trend we are seeing towards increasing consolidation in the IT industry. It leads to obvious questions about customer choice, disruption, and protection of investment that will sound very familiar to those impacted by previous acquisitions, such as Oracle’s less than harmonious takeover of PeopleSoft in the ERP space.

While pundits and commentators speculate on how this latest consolidation event will pan out, we thought we would test the sentiment within the buyer and user community itself. To this end, shortly after the announcement of the acquisition, we surveyed Reg readers to gather views on whether the news was positive or negative for the industry and individual customers, providing respondents with the ability to express their thoughts freely as part of the exercise.

Almost three hundred responses were received in total, with over 80 per cent coming from organisations with an investment in Oracle, BEA or both technologies. Most respondents were customers, though a few partners of the two firms also participated in the survey.

Good for the industry?

On the question of whether the acquisition was good for the industry, a range of views were received, with significant numbers of both positive and negative responses. On balance, however, as we can see from the chart below, the negative view predominates. 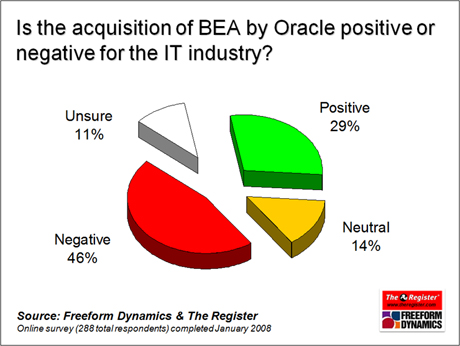 We should point out at this stage that polls of this nature tend to be biased towards the more extreme views that exist, as those who heard the news of the acquisition and just thought “So what?” would be less inclined to express an opinion. Nevertheless, it does provide an indication of the general skew of opinion, and we can also learn a lot by looking at what’s behind the headline numbers. Breaking the results out according to respondents’ existing investments, for example, tells us that the BEA customer base is taking the news far worse than Oracle-only or joint customers: 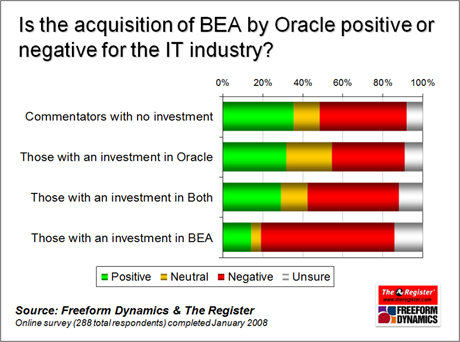 This reaction within the BEA customer base is hardly surprising given the uncertainty that is created when another player assumes control of one of your key suppliers. Concerns about the risk to existing investments and having a new supplier thrust upon you that you wouldn’t necessarily choose of your own accord were commonly expressed in the freeform feedback. Comments were also received from within the joint customer base complaining about dual supplier strategies for middleware being undermined, and fear of being at the mercy of a single mega-vendor like Oracle.