Building on these comments, perhaps those running the show from Redwood Shores that have milked Oracle’s positioning as an antidote to the Microsoft ‘evil empire’ should take heed from a stronger sentiment that has started to emerge. Some, it would seem, are finding it difficult to tell the difference between these two industry giants:

“We need Oracle to have more power, in the same way that Microsoft needs more power.”

“This move progresses Oracle towards being a monopoly.”

The reality is that Oracle is nowhere near being overly dominant with any of its product lines in the same way that Microsoft dominates the desktop OS, office suite and email server markets. It needs to be very careful, however, that its anti-Microsoft rhetoric is not turned back on itself, given the sensitivity that exists amongst customers to vendors accumulating too much power.

The bottom line for customers

Speaking of customers, when respondents were asked about the impact of the acquisition on their own businesses, the difference between the various groups was even clearer: 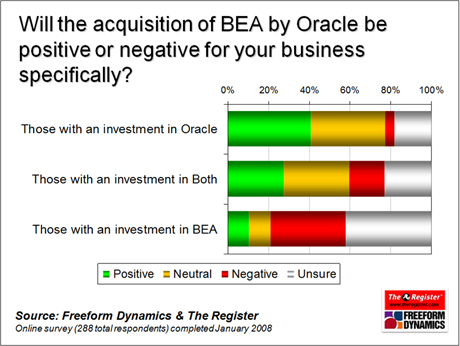 Most of the reasons behind this picture have already been discussed, though there are a few that haven’t been mentioned yet, so here’s a list of commonly cited positive and negative themes ranked in order of frequency of mention:

NEGATIVE THEMES
1.Reduced choice and competition in the market
2.Uncertainties for customers with existing product investments
3.Loss of innovation, Oracle will smother the goodness of BEA
4.Concerns about Oracle as a supplier (style and nature)
5.Increased cost for BEA users (particularly maintenance)
6.Fear of lock-in as Oracle optimises between stack components

POSITIVE THEMES
1.A stronger and more mature solution will emerge (eventually)
2.Rescue of good technology from a company that had lost its way
3.Creation of stronger and more credible competition for IBM
4.Better synergy between BEA technology and Oracle RDBMS, tools, etc
5.Reinforcement of distinction between commercial offerings and OSS
6.More integrated approach to customers and account management

Meanwhile, Oracle has published some reassuring words to customers in an FAQ that can be found here. The message is essentially that “BEA products are expected to evolve into components of Fusion Middleware”, but that “Oracle will support BEA products in a similar manner to other recent Oracle acquisitions”.