Veggies a 'perversion of nature': Official

If you are going to have children, do not be in a hurry to join vegetarians. Many people think that such lifestyle produces rejuvenating effect which showing a positive effect on the reproduction function. However, reproduction depends on animal protein to a large extend. If a man does not receive irreplaceable amino acids with food, he can become infertile in perspective.

Furthermore, cosmetologists say that a typical vegetarian has dry and fragile hair, dull eyes and unhealthy complexion. They can hardly stand criticism and have a low boiling point. They raise their voice, swing their arms and splutter when arguing. They are weak even in their logic. They exemplify their righteousness with the cow, a herbivorous animal, and say that nature originally made a human being as a vegetarian creature.

It's true: anyone who's ever tried to cook a vegetarian can confirm they do indeed have a low boiling point, but melting the stuttering buggers down really is the only way to shut up the shouty, arm-waving meat-dodgers.

Experts have recently put forward a hypothesis that can justify vegetarians. Scientists assert that there are people with irregular metabolism. They do not need animal protein at all. However, such people can be described as a mistake of nature. There are many of them, but most vegetarians are mistaken in their devotion according to this theory.

Terrific stuff. It's traditional at this point to offer a detailed counter-argument to Pravda's assertions, backed by quotes from leading nutritionists and world-class experts in human metabolism.

In this case, however, we've decided to deploy talented thespiatrix Alicia Silverstone to make the case for the defence: 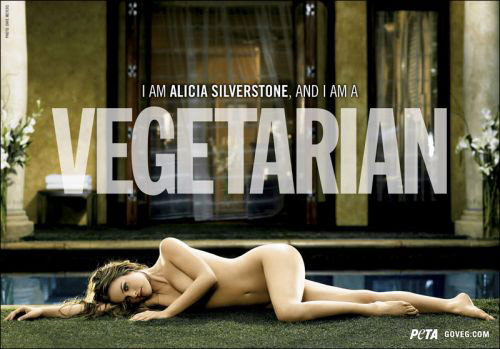 At the launch of this campaign for "Hug a Whale for Jesus" outfit PETA, Silverstone declared: "I wasn't always a vegetarian, but I've always loved animals. Physically, the effect has been amazing."

Well, we'll leave it to you lot to decide whether the highly-talented Ms Silverstone's meat-free charms are sufficient to convince non-believers to risk sterility, lacklustre hair and the possibility of spontaneous melting in summer and join her in the ranks of perversions of nature. ®