Worried about changing the battery in a MacBook Air? Don't - according to one tech site that's taken the skinny machine to bits, opening the laptop up is "a surprisingly pleasant task".

Cynics will, of course, say the 13.3in notebook that's short on stature but big on hype should stay that way, but at least iFixIt's disassembly shows how straightforward the process is and what's inside the slimline shell. 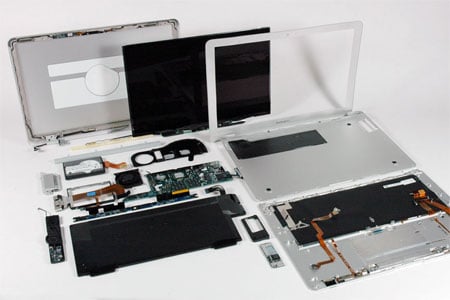 And there are some surprises, like the presence of a Silicon Image SIL1392CNU HDMI chip. The Air only has a proprietary mini-DVI port. However, there's HDCP chippery on the motherboard too, pointing the way, perhaps, to future Airs with the ability to deliver protected hi-def content to HDTVs.

The touchpad's controlled by a Broadcom BCM5974, the same part used by the iPhone and the iPod Touch. Sound is fed through a Realtek ALC885 audio codec. The Air's 802.11b/g/n Wi-Fi is mediated by Broadcom's BCM4321KFBG chip.

The Air's 2GB of 667MHz DDR 2 memory is clearly soldered onto the main circuit board, as 16 1Gb chips, eight on one side of the board and the rest on the other. In the picture above, the two main chips are, left to right, the Core 2 Duo CPU and the Intel integrated northbridge chip, which has the GPU on board.

Taking the Air's lid apart reveals the LED panel to be just 3mm thick fed by a single data and power cable from the motherboard.

But this is just a teaser - check out iFixIt's step-by-step disassembly here.