Lessig gives up on Free Culture

Lessig is moving on - to fight the good fight against "Corruption". The technology-leaning lawyer announced this last year, but has continued to discuss Wikipedia, the Creative Commons and the like. That is until yesterday, when he delivered a "last lecture" on Free Culture at Stanford University.

His speech drew on familiar material. He's spent years fighting America's penchant for copyright extensions. Once upon a time, US law protected a work for 14 years, and then allowed rights' holders to extend that period one time for another 14 years. By 1831, the bar was raised to 28 years for the initial grant with an extra 14 years on renewal. Then things went pear-shaped, with Congress extending copyrights 11 times in the last 40 years, leaving us at a holder's lifetime plus 70 years.

Lessig's most famous battle against this extension "addiction", as he calls it, had him face off against the Supreme Court. In a 2003 ruling, the judges shot down his pleas to curtail copyright extensions, handing the academic a 7-2 defeat.

Over the past few years, Lessig has copped to his failings with this case, blaming the loss on an inability to characterize the importance of the issue in a way that Joe Average can comprehend.

With the Supreme Court drubbing behind him, Lessig has spent recent years on Creative Commons. The lawyer and others wanted to give artists of all types a way to copyright their works in a more flexible fashion.

Lessig explains the Creative Commons and Free Culture in very simple terms these days, so that any moron can keep up. In fact, he employs an odd slide show technique during lectures to make sure that everyone knows what's going on. When Lessig says "door", for example, during a speech the word "door" appears on a screen. He does this for about every fifth word. You can see an example here. Lessig is talking about friends.

The Creative Commons has enjoyed an impressive amount of support. Thousands upon thousands of works are now covered by CC licenses. The hope is that these works can be shared and modified for years to come rather than locked away under the more restrictive, traditional copyright schemes.

This sharing of culture is more reflective of society's past, according to Lessig, and a break with the copyright extension addiction of the 21st century. In addition, it's helping foster new waves of creativity that work well with improved technology.

"There is an emergence of something we can call Tubes," Lessig said, as he talked about these "YouTubes that increasingly spread across to culture of the internet." 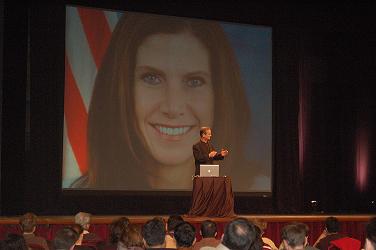 (Lessig is required to highlight things in terms of Google businesses.)

The Creative Commons has been so damn successful that Lessig now needs to bail on championing it full-time.

"I was a pessimist at the beginning of the Free Culture movement," he said. "I am an optimist today.

"The optimism (from the public) is so scary. That is why I had to leave. I had to find another improbable task."