RoTM The indolent Dutch may come to rue the day they ever heard the name of Nico van Staveren, petrol station operator and co-developer of a gas-pumping robot which can allegedly recognise your make of car, whip off the petrol cap and deliver the required amount of combustible. 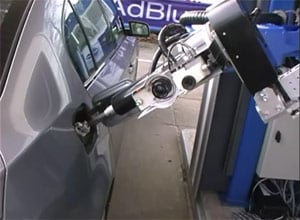 Reuters has quite correctly filed the "TankPitstop" (see pic) under "What could possibly go wrong?", and to be honest the list of potential threats to humanity from handing control of large quantities of flammable material to a cyberattendant is chilling indeed.

In case you're wondering how the €75,000 technological miracle does its stuff, it has a database of vehicles, with their corresponding fuel cap designs and fuel types. Reuters elaborates: "A robotic arm fitted with multiple sensors extends from a regular petrol pump, carefully opens the car's flap, unscrews the cap, picks up the fuel nozzle and directs it toward the tank opening, much as a human arm would, and as efficiently."

Mr van Staveren told the agency: "I was on a farm and I saw a robotic arm milking a cow. If a robot can do that then why can't it fill a car tank, I thought. Drivers needn't get dirty hands or smell of petrol again."

And yes, readers will by now have spotted the TankPitstop's fatal weakness: it only works with non-lockable fuel caps. Accordingly, anyone among the 95 per cent of people whose vehicles now boast an advanced key system are likely to be greeted by the Tankpitstop menacingly waving a box of matches while demanding: "Does not compute. Carbon-based lifeform will unlock fuel tank access port. You have 30 seconds to comply..." ®

Members of the neoLuddite Resistance Army are advised to familiarise themselves with the TankPitstop here. Please report any exploitable vulnerabilities to the NRA's Montana bunker complex via the usual secure channels.