We found that getting this right took a little practice - tasks like setting the output level of the source, for example - but performance was good enough to warrant the feature’s inclusion. The digitisation rate can be set to 192Kb/s, 128Kb/s or 64Kb/s. 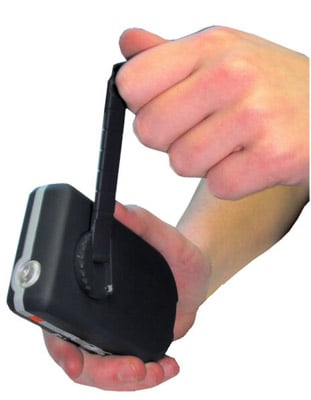 There are a few issues. The electrical output from some turntables may not be compatible with the player, in which case you have to get all clever by bringing a pre-amp into play, but the function is still worth having.

The player also comes with a really good standard of accessories. The USB cable has a really neat ‘reel’ which automatically retracts any spare cable during connection to a computer so there's no spaghetti to get tangled up in.

As the unit can also be used as a phone charger, there are also a range of converters bundled to make the machine compatible with most phones. There's even a handy little torch mounted on the front of the player.

From a technical point of view this machine is a considerable achievement and marks another milestone in the development of kinetically powered products. Of course it will appeal strongly to those with green issues high on their agenda, so little Jeremy or Jilly may finally get that player they has been craving instead of another jumper knitted out of bee spit this Christmas. However, it would be a shame if the player’s appeal was limited to just this market.