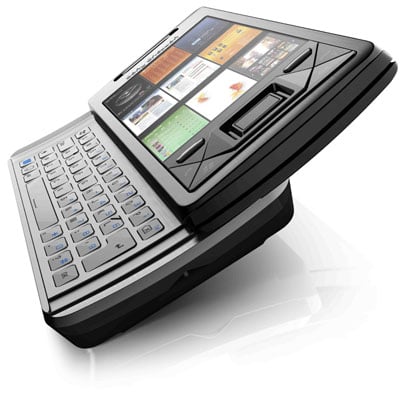 Sony Ericsson calls the X1 an "arc slider" handset - the keyboard curves forward as it slides down. The handset measures 110 x 53 x 16.7mm and weighs in at 145g. It comes with 400MB of internal memory with Micro SD card support. It has a 3.2-megapixel autofocus camera.

The X1 is Sony Ericsson's first Windows Mobile handset, but the company's attempted to overcome the Microsoft OS' interface limitations with a front end of its own - much as HTC now adds its Touch UI to its own Windows Mobile phones.

Sony Ericsson's Xperia Panels UI display photo-style icons of key applications to guide users straight to the tasks they want to perform. Which apps are presented this way is entirely up to the user, Sony Erisson said.

The Xperia X1 will be available in the second half of the year. No pricing information was available however.