When poor people pollute - the Tata Nano and eco-crime

But come in, little car, the modellers have been expecting you

It's small, it's cheap, it's low emission so... the arrival of the Tata Nano, India's new 'people's car', has been greeted by a wailing and a gnashing of the teeth from the environmental aristocracy. The prospect of millions of the global peasantry driving, emitting and pushing up 'our' gas prices is a nightmare. It promises to be, said Yale environmental law professor Daniel Esty, "an environmental disaster of substantial proportions."

In fact, the size, or even existence, of this environmental disaster is doubtful. A few millions of a car that emits 30 g CO2 per km simply isn't even an influence upon global CO2 emissions, let alone a disaster of even insubstantial portions. At that emission rate, doing 20,000 km a year each car will produce 600 kg of CO2: one hundred million of them on the roads would be less than 1 per cent of current emissions of over 6 Gtonnes. No, not substantial then.

But whether it is a substantial addition or not is dwarfed by the seeming ignorance of other commentators: "In none of our reports did we assume there'd be a car like this," said Judi Greenwald, a researcher with the Pew Center on Global Climate Change. Well, OK, cut Judi a little slack, no one did predict a car exactly like this: but everyone has indeed predicted that something similar would happen, that the peons would at some point be able to get off Shank's Pony and move around in the same way us civilised folks do. Indeed, all the concerns we have about global warming are rather based upon predictions that this will happen. 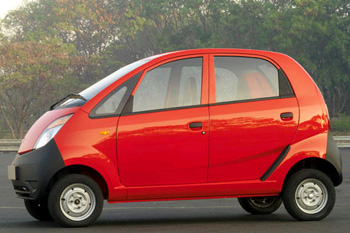 The Tata Nano: Stop me before I pollute again.

Apologies, but this is where a little economics becomes necessary. Yes, we've all heard of the International Panel on Climate Change, the IPCC, those people who issue the reports containing the scientific consensus on the issue (yes, we are assuming they are correct here). Greenland's ice disappears sometime around 2,500, East Antarctica a couple of centuries later and boy, then we all really are in trouble. But all too few people, and unfortunately all too few environmentalists, stop and wonder where those numbers come from. Yes, we've got lovely computer models to tell us what the temperature rises will be if we stick x amount of methane into the atmosphere, y amount of CO2 and so on: but someone, somewhere, has had to work out how much methane, how much CO2 is likely to be so emitted. And that comes from the Special Report on Emissions Scenarios, the SRES.

The SRES is a series of economic models based upon four families (again divided into scenarios but we're not going to worry about that level of detail). The A1 family assumes that in 2100 the world output (GDP) will be $550 trillion for some 7 billion people. That is, that the world will be at least ten times richer in 92 years than it was eight years ago (essentially, growth goes on as it has since 1850). A2 (what the Stern Review uses and, umm, the low globalisation model) has 16 billion people and $250 trillion in GDP. B2 10 billions and $250 trillion, B1 $350 trillion and 7 billion again. These are the economic assumptions upon which everything we are told about climate change rests. Yes, there are different assumptions in them about how technology develops but all of them are entirely without any attempts at all at mitigation. That is, all the numbers we work with assume that we don't have carbon taxes, we don't ban patio heaters, we don't abolish the aeroplane. Anything we do along those lines reduces the damage that might be done.

Just as an aside we might note that these models all assume that the less trade we have, the more regionally based the world economy, the more self-sufficient we all become, buying locally, the worse the outcome. Campaigning to reduce globalisation to counter global warming is like fucking for virginity.

While none of the families specifically predicts the Tata Nano, all of them predict that the great unwashed will indeed have transport: and no, none of them predict that that transport will not be fossil fuel based. So while those folks at the Pew Center might be correct that this specific thing was not predicted, something very like it was. In fact, the existence of growing wealth and thus mobility is rather written into the plans that worry us.

Which leads us to the glorious George Monbiot. In a recent column he said:

"So economic growth this century could be 32 times as big an environmental issue as population growth. And if governments, banks and businesses have their way, it never stops. By 2115, the cumulative total rises to 3,200%, by 2138 to 6,400%. As resources are finite, this is of course impossible, but it is not hard to see that rising economic activity - not human numbers - is the immediate and overwhelming threat."

Leave aside his (known) ignorance of economics: growth is not defined by nor is it dependent upon the consumption of resources. It's defined as the addition of value to them: making sandpaper and a computer chip both consume sand, but one is the addition of rather more value than the other. Thus economic growth is not constrained in the way that he thinks by resource availability. Look rather to his "this is of course impossible".

In talking about climate change and the dangers thereof he tells us that a continuation of past economic growth is impossible. But as we can see above, the world's largest report on the subject, indeed the scientific consensus, is that said growth is indeed possible. In fact, the terrors of climate change depend upon it being so, for the whole science is based upon the outcome of economic growth. Thus George has either, by showing the impossibility, told us that climate change isn't a problem or that, perhaps more likely, he doesn't know what he's talking about.

Which brings us back to those worrying about the Tata Nano: it isn't a horror for the climate, it isn't a disaster. It's actually one of the things already built into our models which lead us to our current understanding of what will happen. We've already taken account of it in our calculations, you see? As we have all those other things: more flights, more people, more wealth. We even know the solution, a Pigou Tax, but that's a matter for another day. ®

Tim Worstall knows more about rare metals than most might think wise, and writes for himself at timworstall.com, and for The Business and the Adam Smith Institute, among others.