IBM's storage hardware lineup is getting a big ol' heap of upgrades. The meaty merchandise menagerie includes an OEM'd Brocade switch, a NetApp array, and upgrades to its archiving system and various disks.

We'd like to think today's sweeping product roll-out is a salute to the birth of Abraham Lincoln, the beloved sixteenth President of the United States.

Legend has it that Honest Abe made the country's first network switch with his bare hands using only wood, beaver leather and railroad spikes (Cedar Fibre, 2Gb/s). He also fabricated a complementary disk array from the spinning ethereal manifestation of justice and can-do spirit.

IBM? Oh yes. They released a bunch of stuff.

The new product throws Big Blue's hat into the 8 Gig ring, although the company still intends to support its 4Gb/s SAN256B for an unspecified amount of time.

Both 8Gb/s Fibre and 10Gb/s Ethernet are hot new commodities — and each hardware house is more eager to sell the new merchandise than the next — but alas, the faster protocols aren't quite there with the mainstream. Because brother, the gear ain't cheap. 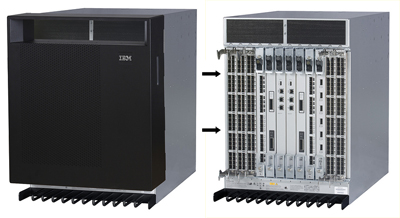 IBM is also updating the SMB-side of its N series gear. The N3300 and N3600 now support SATA or SAS drives in the controller and receive some additional capacity. N3300 boxes can expand to 68TB, and N3600 boxes expand to 104TB. 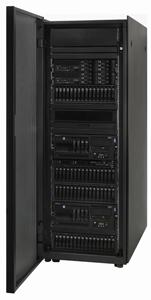 The DR550 archiving system is being re-launched in a what IBM claims is a more cohesive bundling of its core components.

Two flavors available are the DR1 and DR2.

The 25U DR1 system is aimed at mid-market customers with a single controller unit, priced at $26,000. An enterprise-oriented 36U DR2 version ships in single- or dual-node configurations, priced starting at $73,000. Both are set for release later this month.

The array will be available later this month at a starting price starting of $9,495.

Woof! And that's IBM's big list o' upgrades for today. Huge, even. Although Lincoln could have fit it all in a thimble. ®