Unless your Xbox 360 is an Elite model, then your console won't have an HDMI point for a direct digital connection to an HD TV. However, now you can odd one yourself. Manufacturer MadCatz has launched an HDMI conversion kit for the console. 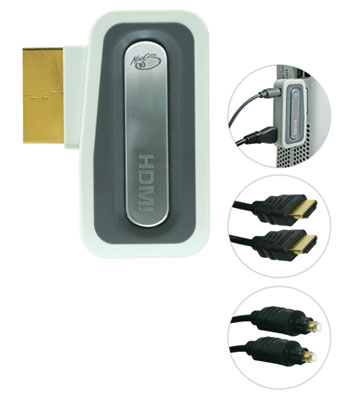 The dongle connects into the console’s AV port and converts the signal to a digital HDMI stream, at a resolution of up to 1080p. The adaptor supports the HDMI 1.3 standard.

MadCatz’s Conversion Kit is able to transmit full multi-channel digital audio through an HDMI cable, which the company said eliminates the need for multiple video and audio connections. However, if you’d rather pump the pounding bass of, say, Halo 3 gunfire through your stereo, then the Conversion Kit also has a digital audio output included for such requirements.

The HDMI Conversion Kit is available in the US now for around $90 (£45/€65). Alas, its main supplier won't ship overseas, and for now a European release date or price hasn’t been given.