A new global map compiled by analysing 17 different factors including fishing, global warming and pollution has revealed that 40 per cent of the world's oceans are heavily affected by human activities, while just a small percentage of seawater has completely escaped the effects of man's heavy hand. 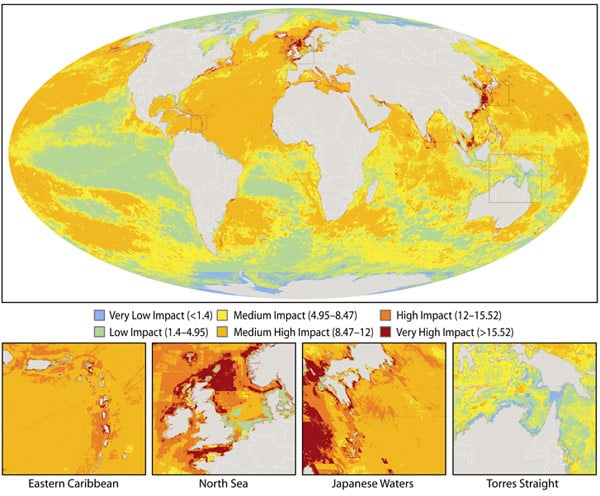 The map, which debuts in this week's issue of Science, is the work of National Science Foundation's (NSF) National Center for Ecological Analysis and Synthesis (NCEAS) at the University of California at Santa Barbara. Nineteen scientists from various universities, NGOs, and government agencies "synthesized global data on human impacts to marine ecosystems such as coral reefs, seagrass beds, continental shelves and the deep ocean".

According to the National Science Foundation, while previous studies have "focused largely on single activities or single ecosystems in isolation", this time researchers were "able to look at the summed influence of human activities across the entire ocean".

Lead scientist Ben Halpern of NCEAS explained: "This project allows us to finally start to see the big picture of how humans are affecting the oceans. Our results show that when these and other individual impacts are summed up, the big picture looks much worse than I imagine most people expected. It was certainly a surprise to me."

The upshot is that "the most heavily affected waters in the world include large areas of the North Sea, the South and East China Seas, the Caribbean Sea, the east coast of North America, the Mediterranean Sea, the Red Sea, the Persian Gulf, the Bering Sea and several regions in the western Pacific". Polar waters, meanwhile, are the least affected.

NCEAS boffin Carrie Kappel said of the latter: "Unfortunately, as polar ice sheets disappear with warming global climate and human activities spread into these areas, there is a great risk of rapid degradation of these relatively pristine ecosystems."

Halpern, however, remained upbeat, offering: "There is definitely room for hope. With targeted efforts to protect the chunks of the ocean that remain relatively pristine, we have a good chance of preserving these areas in good condition."

The scientists admit their map is not definitive, "because many human activities are poorly studied or lack good data". Which is probably a good thing, judging by what scientist Fio Micheli of Stanford University had to say on the matter: "Our hope is that as more data become available, the maps will be refined and updated. But this will almost certainly create a more dire picture." ®

The research involved a four-step process. First, the scientists developed techniques to quantify and compare how different human activities affect each marine ecosystem. For example, fertilizer runoff has been shown to have a large effect on coral reefs but a much smaller one on kelp forests.

Second, the researchers gathered and processed global data on the distributions of marine ecosystems and human influences.

Then the scientists combined data from the first and second steps to determine "human impact scores" for each location in the world.

Finally, using global estimates of the condition of marine ecosystems from previous studies, the researchers were able to ground-truth their impact scores.