Secret tech probably in the sea by now - dammit

Updated Pentagon officials say that a malfunctioning US spy satellite targeted for destruction has been hit by a missile-defence interceptor. The dead spacecraft smashed into a kinetic kill vehicle, lobbed into the satellite's path 250km above the Pacific by a Standard missile from US cruiser Lake Erie.

According to a Pentagon release, the Lake Erie fired its specially-modified Standard SM-3 interceptor at 0326 this morning UK time. The kinetic warhead was much less massive than the spacecraft which hit it, so the resulting cloud of wreckage will have carried on along the satellite's previous orbital track. 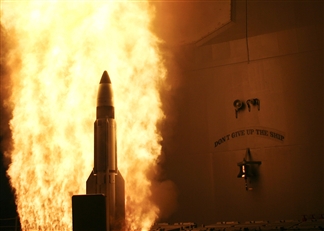 US authorities have previously estimated that the bulk of the debris would re-enter and burn up within "two orbits" after a hit. The satellite was previously circling the Earth every 90 minutes, so this period has already passed. Owing to the timing of the Pacific shot, the wreckage cloud will have been mostly above oceans while this was occurring. However it will also have passed over sparsely-inhabited Canada (once), and twice over Australia.

According to the Pentagon, "nearly all" the debris will be gone in "24-48" hours from the shot, and the last pieces will have re-entered after 40 days. British expert Professor Richard Crowther of the Science and Technology Facilities Council reckons that the intercept will mean 25 per cent of the sat surviving to reach Earth (or in this case, probably sea) as opposed to say 50 per cent had nothing been done.

The other effect of the interception is that the bits which did survive will mostly have come down along a track of the American government's choosing, mainly into the ocean or thinly-peopled nations closely allied to the US. In other words, pieces are much, much less likely to be found at all - and if they are, there is a very good chance they will be recovered by friendly governments.

If no intercept had taken place, more of the spacecraft would have come down - and the pieces could have wound up anywhere between the Arctic and Antarctic.

The Pentagon is sticking to its story that the firing was motivated purely by the danger from the satellite's frozen hydrazine manoeuvring-fuel tank, but this is widely disbelieved as many larger objects containing similar (or greater) quantities of toxic fuel fall from the sky every year. The hydrazine story is just a diplomatic fiction, like the idea that Israel has no nuclear weapons.

In reality, there are two theories which might explain the US action. Firstly, the intercept may have been a piece of muscle-flexing by the Pentagon, aimed at overawing foriegn powers and gaining domestic support for the troubled missile-defence programme - without whose hardware and knowhow the sat-shoot would have been impossible.

But if this was the thinking at the White House, the reasoning seems flawed. Russia and China will gain diplomatic capital from this, and will find it easier to big up their own space-military capability too. Only America is truly reliant on military/intelligence satellites; the US has much more to lose here than its adversaries.

As for gaining domestic support and funding, the Standard SM-3 was already much caressed on Capitol Hill. The lame ducks of the missile defence programme are the raygun-747 (or Airborne Laser) and the Ground-Based Interceptor (GBI) rockets, the bigger landbased version of the Standard SM-3.

The GBIs could have been used against the broken sky-spy; they're supposed to be even more capable than SM-3. Success might have eased the Pentagon's troubled path towards emplacing GBIs and accompanying radars in Eastern Europe, or at least in getting funds to build them.

But the existing GBIs are based in Alaska and California. An intercept near either of these places would have seen much more wreckage strewn on land rather than out at sea. This wouldn't really mean much danger to people - the odds of deaths or injury would still be vanishingly low - but it would seriously increase the chance of satellite pieces being found one day.

That's why we here on the Vulture space-war desk incline to the second theory - that the US simply didn't want any of this satellite to fall into unfriendly hands. There may have been an element of "let's do it to see if we can", but the whole operation seems to have been designed to keep the secrets of the failed space platform.

These secrets may have been relatively mundane - perhaps a low-power yet hi-def orbital radar. They may have merely been embarrassing: credible reports suggest that the broken spyeye came out of a badly-run, wasteful, foolish secret programme. Perhaps it was destroyed merely to spare the black-projects empire some blushes. Or who knows, there may have been a truly game-changing piece of kit aboard - a working submarine tracker, some dazzling new bit of intercept gear.

Sadly - from a reporter's viewpoint, anyway - it now seems likely to be a very long time before anyone finds out.®

At a midday Pentagon briefing (UK time), US marine general James Cartwright - vice chairman of the Joint Chiefs - gave further details of the intercept to journalists. Cartwright said that a network of US sensors had confirmed that the satellite was hit and broken up. He said that a "fireball" and a "vapour cloud" had been observed, with spectral analysis indicating the presence of hydrazine venting, but was not yet ready to confirm that the fuel tank had been smashed.

As to debris, the general said that "a bunch of techies" would have a complete picture of what remained in orbit in 24-48 hours. However, he said that a large number of re-entries had already been confirmed above the Atlantic and Pacific, and thus far "nothing larger than a football" had been detected remaining in orbit.

Cartwright was also at pains to emphasise that the intercept mission was a "one time event ... not a capability that will be coming into service." He said that the shot had happened purely because the satellite had been unresponsive since launch, which was a rare - almost unique - occurrence. The general added that there are already many failsafes built into spy satellites to prevent such events, and that discussions were being held about increasing reliability still further.

Questioned on a possible wish to safeguard the satellite's tech lying behind the shoot decision, Cartwright said the attitude regarding such kit was "if it comes down, it comes down ... that would not have been sufficient" to justify firing. He said the Pentagon did have procedures for dealing with sensitive crashlanded sat bits, but only after their descent.