Hubble peers into the Great Eye of Sauron

Astronomers at the University of California, Berkeley, and NASA's Goddard Space Flight Center have released a rather remarkable Hubble image of a ring of dust around star Fomalhaut, described by New Scientist as resembling "the Great Eye of Sauron". 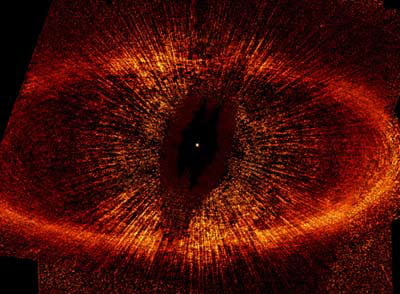 The boffins used the Hubble coronagraph to block light from Fomalhaut and enhance the ring which, as you can see, is "significantly askew". The reason for this, they postulate, is that the dust ring is under the influence of orbiting planet (or planets), possibly a body rotating around the star at approximately Pluto's distance from the sun, or one-third of the ring's radius.

Fomalhaut, aka Alpha Piscis Austrini, is one of the brightest stars in the night sky, lying around 25 light years from Earth and weighing in at roughly 2.3 solar masses. Its name comes from the Arabic fum al-ħawt, or "whale's mouth", although we reckon "Sauron's Eye" might be a suitable new moniker. ®