Zibri, the coder behind the latest iPhone jailbreaking and unlocking app, ZiPhone, has warned handset owners not to upgrade to the newly released version 1.1.4 firmware until the tool has been fully tested with the update.

Apple posted the iPhone OS update last night. So far, all it's said about the new version is that the code contains a number of "bug fixes". What glitches they repair are not yet known.

ZiPhone was released earlier this month and prompted a mad dash to its download page after iPhone owners discovered just how easy the tool makes activating, jailbreaking and unlocking Apple's handset. 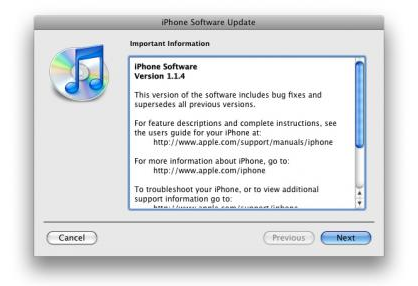 In order to use an iPhone, it has to be first activated using iTunes, and a number of tools exist to allow iPhone buyers to activate their purchases without Apple's software. Once activated, the handset can be used to make and take calls through official carriers. Unlocking is the process of using the iPhone with other networks' SIM cards. Jailbreaking opens the phone to allow the installation of third-party apps - one such is AnySIM, an alternative unlocking program.

Zibri last night said he plans to perform further tests on ZiPhone's compatibility with firmware 1.1.4, but he's already found the new encryption key for the partition on the handset's solid-state drive that holds the OS.

"Expect a new version in two days," Zibri said on his website, though users who've not helped his efforts with cash will have to wait a day longer.

Some iPhone owners have tried the hack anyway, with generally positive results.

Special Report: Unlocking the iPhone for pleasure and profit... revisited