Analysis Earlier this month, word got out that Microsoft was funding its own intellectual property rights curriculum in schools.

The reaction was understandably negative.

The basis of Redmond's pitch was a small survey they sponsored where nearly half of the kids polled said they were unfamiliar with the rules and guidelines of using copyrighted media. Microsoft figured tots would be less inclined to steal someone's IP if they knew about the alleged consequences.

A lot of digital ink was used to slam Microsoft's scheme. People need Redmond telling them about IP rules like they need Pavorotti schooling them about a well-balanced diet.

But just how insidious is this particular corporate creeping into academia? Before we take a look, let's get some background.

The curriculum (which can be found here) was created by Topics Education, a firm that specializes in presenting school courses based on their clients agenda. It's currently in a testing phase, that will end in March. If the program is successful, pieces of the curriculum could show up in schools across the US.

The curriculum is broken into four parts, each using various lessons and activities that revolve around a different IP-related case study. 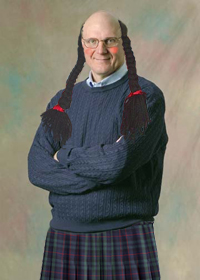 For example, unit one is titled "Intellectual What?" Here, students are introduced to an unwitting high school sophomore who recorded a student council sponsored "battle of the bands" talent show with his camcorder.

When our student decides to sell a few tapes of the show, he's called into the vice principal's office. Because the school had organized the event as a fund raiser, they think any profits made should go towards its computer center. One of the show participants is worried her song could be stolen by a pop singer. Another is worried that Metallica will sue him for doing a cover of his song.

Who is wrong or right in the scenario is left open. After contemplating this example, students are given various activities such as a role-play discussion and an assignment to research who "owns the rights" in this case.

Topics Education "principal" Bruce Nofsinger said his organization tried to put together a curriculum that doesn't strictly push an agenda.

"Our goal has never been to come across in a punitive way, where we want people to see it in black and white terms," said Nofsinger. We wanted to embrace the gray aspect of IP rights."

Nofsinger said Topics was chosen by Microsoft's advertising agency DDB in Seattle, Washington back in August. Topics has past experience creating student courses for various organizations, such as financial literacy awareness for Citigroup and Wachovia, and a classroom program revolving around Al Gore's documentary, An Inconvenient Truth.

Nofsinger said Microsoft has been a "middle of the road" client. Redmond has reviewed everything Topics has done for the curriculum, but has not been "overbearing."

"We want our curriculum to be what the clients want it to be — but with the realities of what teachers will be looking for and perceive as a benefit for their students," said Nofsinger. "Teachers will smell a crass marketing ploy from a mile away."

Some of the material, however, does carry a sting of the familiar scare tactics from Microsoft and its ilk. Here is an example of a question in Unit 2: "Rule of Law":

Counterfeit software:
a) Does not have a warranty, guarantee, or service support.
b) Violates intellectual property rights law.
c) Can contaminate your computer with a virus.
d) All of the above.

The desired answer is obvious. Perhaps it's not even necessary to point out that it's more common for viruses to be accidentally installed through perfectly legal means.