NASA has revealed "the highest resolution terrain mapping to date" of the Moon's south pole, revealing that it's "much more rugged than previously understood".

Scientists at the agency's Jet Propulsion Laboratory in Pasadena used* the Goldstone Solar System Radar in the Mojave Desert to capture the 20 metres per pixel data - 50 times the resolution of the previous best of one kilometre per pixel returned by the Clementine spacecraft.

The result of their efforts is a series of images and animations, including this digital elevation map: 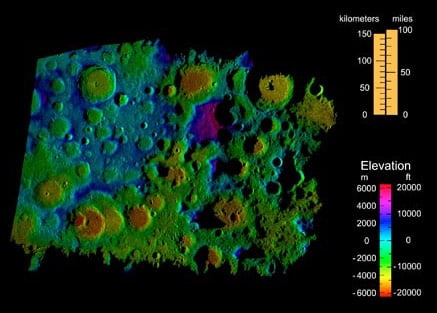 The findings are significant because the area around the pole's "Shackleton Crater" has been mooted as a possible landing site for future manned exploration.

Doug Cooke, deputy associate administrator for the Exploration Systems Mission Directorate at NASA Headquarters in Washington, said: "The south pole of the Moon certainly would be a beautiful place to explore. We now know the south pole has peaks as high as Mt McKinley and crater floors four times deeper than the Grand Canyon. There are challenges that come with such rugged terrain, and these data will be an invaluable tool for advance planning of lunar missions."

Cooke denied the terrain might prompt NASA to reconsider the area as a suitable landing site, telling reporters: "I don't think it's less attractive."

NASA lunar programme scientist Kelly Snook agreed, insisting: "It really calls on us to rise to the challenge of getting there, rather than having engineering constraints limit us."

That mission planners are still prepared to consider a landing in the area around the Shackleton Crater is because it may contain critical water ice. Cooke stressed: "Having water ice gives us a source of water and gives us a source of hydrogen and oxygen, which can be made into fuel. One of the things we're interested in doing as we explore the Moon and eventually Mars is to learn how to take advantage of the resources that are there to enhance the missions and reduce the amount of resupply and logistics from Earth."

NASA's next close-up view of the lunar surface will be provided by the Lunar Reconnaissance Orbiter, slated for a late 2008 launch and which will return images at resolutions to one metre, as well as "temperature maps, ultraviolet images, characterisation of radiation on the Moon and a high resolution 3-D map". This data will give scientists "knowledge of polar illumination conditions, identify potential resources and hazards, and enable safe landing site selection". ®

"The radar bounced off the rough-hewn lunar terrain over an area measuring about 400 miles by 250 miles. Signals were reflected back to two of Goldstone's 34-meter antennas on Earth. The roundtrip time, from the antenna to the Moon and back, was about two-and-a-half seconds."

Once is an accident. Twice is coincidence. Surely there won't a third incident for roadside assistance company
Security3 Feb 2023 | 8

Wish you could IP Freely? What's the wording holding you back in your current job?
On-Prem3 Feb 2023 | 30

Floats over missile silos, shooting it down ruled more dangerous than whatever it's up to
Channel3 Feb 2023 | 50