The last piece of the "world’s largest jigsaw puzzle", as CERN puts it, was lowered down the 100 metre shaft into the ATLAS chamber which lies on the 27km-circumference circular tunnel housing the LHC. 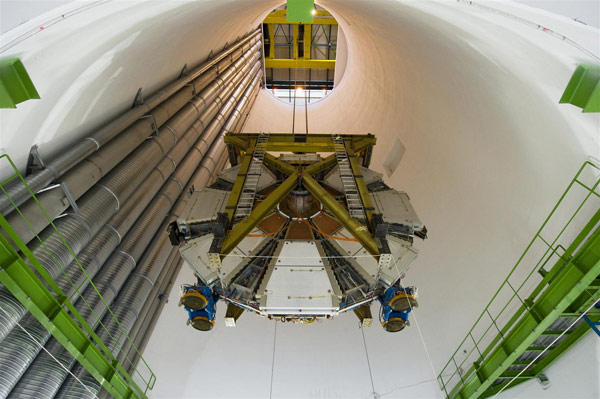 ATLAS technical coordinator Marzio Nessi said: “This is an exciting day for us. The installation process is coming to its conclusion and we are gearing up to start a new programme of physics research.”

The LHC will, once operational, allow scientists to probe the mysteries of the universe, including dark matter, matter "as it existed close to the beginning of time" and possible extra dimensions of spacetime. ATLAS's role is to measure particles produced in proton-proton collisions within its 7000 tonne, 28,750 cubic metre bulk packing 100 million sensors.

CERN explains: "As particles pass through a magnetic field produced by superconducting magnets, this detector has the ability to accurately track them to the width of a human hair."

CERN now hopes to have the LHC up and running by the summer. The project has not entirely run on rails, with various technical difficulties conspiring to delay the programme. Back in March last year, the structure supporting the particle accelerator's proton-accelerating key magnets failed during a routine test - a "near disaster" which had serious implications for the switch-on timetable. ®