NASA has released a rather nice snap of a Martian "avalanche" - a cascade of ice and dust tumbling down a slope near the Red Planet's north pole captured by its Mars Reconnaissance Orbiter's High Resolution Imaging Science Experiment (HiRISE) on 19 February: 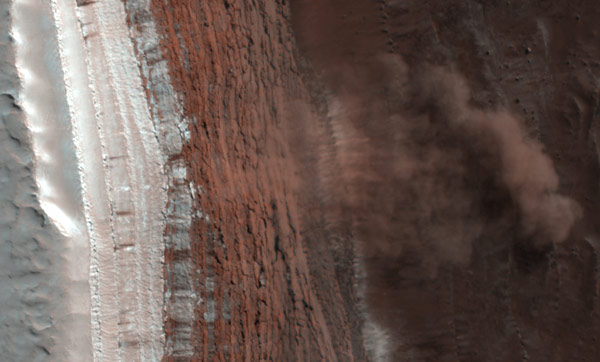 HiRISE has been repeatedly perusing selected Martian sites to track seasonal changes, NASA explains, but wasn't in this case focused on the 700 metre tall cliff.

The cliff face has layers "known to be rich in water ice", and scientists now plan to keep an eye on developments at the slope's base to determine what proportion of the debris it represents.

HiRISE collaborator Patrick Russell of the University of Berne elaborated: "If blocks of ice broke loose and fell, we expect the water in them will be changing from solid to gas. We'll be watching to see if blocks and other debris shrink in size. What we learn could give us a better understanding of one part of the water cycle on Mars."

As well as the photo of the dynamic Martian surface, NASA yesterday released about 2,400 HiRISE images, including one of the Earth and Moon as seen from our neighbour.

NASA has more info* on the avalanche pic here and hi-res images here. ®

The scarp in this image is on the edge of the dome of layered deposits centered on Mars' north pole. From top to bottom this impressive cliff is over 700 metres (2,300 feet) tall and reaches slopes over 60 degrees. The top part of the scarp, to the left of the images, is still covered with bright (white) carbon dioxide frost which is disappearing from the polar regions as spring progresses. The upper mid-toned (pinkish-brownish) section is composed of layers (difficult to see here) that are mostly ice with varying amounts of dust. The darkest deposits below form more gentle slopes, less than 20 degrees, and are mainly composed of two materials: mid-toned layers, possibly ice-rich, that form small shelves, and more mobile, wide-spread, sand-sized dark material. The wavy forms on the flatter areas to the right are dunes.

Mozilla may seem like it has forgotten, but this is the most customizable browser going
Software26 Sep 2022 | 26

Who, Me? Fake BSOD became tool of revenge when a staffer ignored the sensible rules of seniority
Personal Tech26 Sep 2022 | 29