And Ninthly Shortly before nightfall, the small man emerged from his house, checked on his goats and prayed. His most pressing plea to the higher power? Stop the clowns from scaring his children and stop his children from scaring the goats - Julio Stantore, The Diving Bell and the Cabrito Buffet

A number of organs today filled their pages with talk about Yahoo! engaging in board machinations to delay a proxy war with Microsoft. The attention to these rather mundane proceedings misses Yahoo!'s far more sweeping rejuvenation plan intended to counter any corporate suitor. Yahoo! has embraced the notion that sex sells on a scale that exceeds any previous work by a prominent portal.

In short, Yahoo! is all about knobs.

Several months ago, I brought you the Pulitzer Prize nominated story on how Yahoo! pulled its war correspondent Kevin Sites out of the Middle East to write about metrosexual preachers and pornographic huggers. Yahoo! thrusting its top scribe into the sexually charged underbelly of American society offered one hint as to its titillating plans.

This week, Yahoo! showed just how far its orgiastic portal play will stretch.

The company has hired BusinessWeek sex-pot and Web 2.0 hype diarist Sarah Lacy to wear as few clothes as possible during financial news web casts. Lacy has been working at this gig for a few weeks now, teaming with king of the reprobates Henry Blodget. I've been watching both individuals' work closely - like with one tissue for crying and other for mopping up spills - and found them quite charming.

Then, however, I ran across the "iPhone Smackdown: Apple vs RIM, Lacy vs Knobs" debate this week and retched - for hours.

Yahoo! tried to disguise this as some sort of financial chat about the state of the mobile phone market for its Finance viewers. But there's Lacy wearing S&M thigh-highs and talking non-stop about knobs, knobs, knobs. 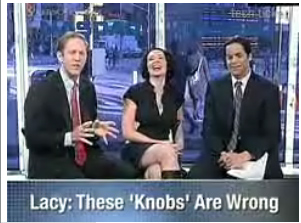 One reader on the Fake Steve Jobs blog commented on this stunt, saying "Her knobs are oh so right." Another noted that he would "like to insert my iPhone into her dock."

Such salacious remarks will fail to match the thoughts surging through our UK readers' minds. For a rose by any other name may smell as sweet, but a knob by any other name does not turn as well as a door handle.

And in the links below Lacy's leather-clad legs and swollen sweater, I find a pointer to an NWA "Straight Out of Compton" music video. This tune features such riveting lyrics as "Shoot a motherfucker in a minute - I find a good piece o' pussy, I go up in it - So if you're at a show in the front row - I'm a call you a bitch or dirty-ass ho." So exactly the kind of fare Yahoo! Finance viewers want blaring in their offices.

I won't make too much of the NWA video. After all, it was just provided in the links section of the post. One does wonder though whether Yahoo! wants us thinking about its mobile phone chat or something quite different when pairing such material with Lacy's knobs. ®