Most British filesharers would stop if warned - survey

Could the UK record industry's Three Strikes policy halt file sharing? Few give the idea much hope, at least not unless some compelling alternatives are offered - but a survey of British file-sharers suggests otherwise. Seven out of 10 British file-sharers say they would stop infringing if they received a termination warning from their ISP. The threat of cutting off one's pipe seems to be a deterrent.

That's according to a major survey of media habits conducted by Entertainment Research for Wiggins, a London law firm. The survey covers all kinds of media habits, and runs to almost 250 pages. As we've noted before, there's a "virtue factor" in responding to surveys that isn't always apparent in real life. People say they want higher taxes - then vote for lower taxes. People say they'll pay for music, then grab it for free.

But let's have a look at the responses.

Under the BPI proposal, borrowed from France and tacitly blessed by the UK government, an incident of copyright infringement would lead to a warning from the service provider. A second incident would be a "Final Notice" of termination, and a third would lose the household its internet connection.

Only eight per cent of those surveyed 'fess up to sharing music online regularly, with 10 per cent saying they share occasionally and 11 per cent only "rarely". Fourteen per cent say they didn't know what file sharing is.

Surprisingly, the number of regular online file-sharers is matched (and amongst some demographics, exceeded) by people who admit to sharing hard drives. However the figure is of little value in this context, as it doesn't distinguish between drive-sharing of infringing material, and sharing to pass along some family photos or the homework. 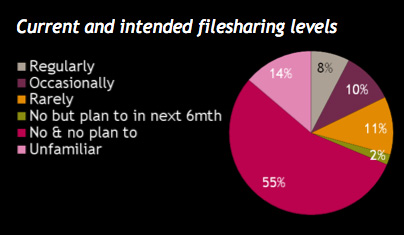 Seventy per cent of respondents agreed that if they received a warning from the ISP, they would stop sharing online. 66 per cent said they would stop if there was a stronger chance of them being caught.

There's slightly less of a deterrent value from seeing media coverage of downloaders being caught for infringement, at around 50 per cent. And most don't think they will be caught: 68 per cent think it's "very unlikely" that they'll be found out.

The survey has several lessons for the music business and ISPs. If the BPI is serious about changing our behaviour, then it will have to invest in the project: parading a few scalps of copyright infringers for the media won't have much effect. 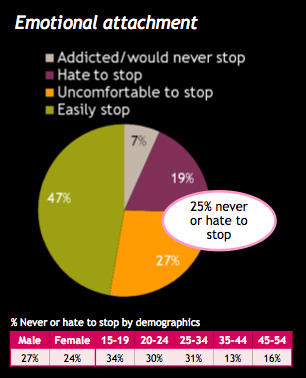 Forty-seven per cent say they could "easily stop" file sharing. Are they telling the truth?

On the other hand, perhaps file sharing is "softer" and less of an entrenched habit than you'd think. Not every P2P file sharer is a badge-wearing, Boing Boing-reading Freetard. More people are "occasional" or "rare" file-sharers than regulars. Almost half say they would stop "easily".

(That's where our caveat about respondents wishing to appear virtuous comes in.)

As if to bear out this difference in outlook behind the technically adept and the average punter - 53 per cent of respondents had never heard of DRM (digital rights management), and only one in five claim to have a good understanding of it.

Among other highlights in the survey:

So there you go.

Wiggins has conducted legal work for big media clients, including filing lawsuits against file sharers on behalf of the BPI. ®