Has your shifty foreign neighbour got 16 mobes?

The Metropolitan Police have launched an intensive media onslaught aimed at advising Londoners just what to do if their shifty-looking Arab next door neighbour is packing mulitiple mobes, trading SIMs with the men in black turbans, taking delivery of binary liquid explosives, photographing CCTV cameras, or generally acting in a manner likely to undermine the security of the state: 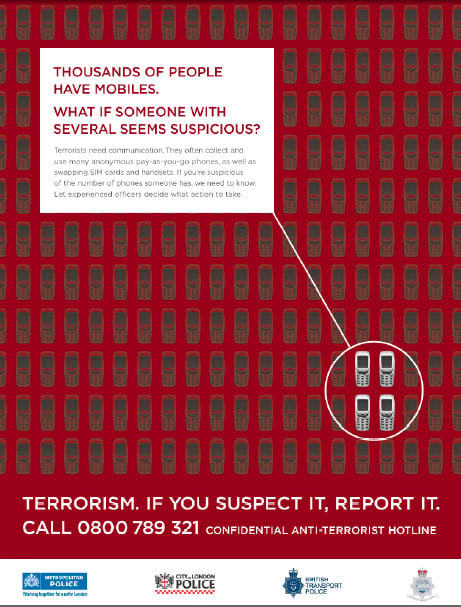 The above poster forms part of a package of awareness-raising measures also including radio ads, postcards, and stickers, all pointing to the Anti-Terrorist Hotline on 0800 789 321.

Fair enough - up to a point. The transcript of the radio ad, which features "an individual thinking out loud about concerns she has around some suspicious behaviour", explains:

Female Voice over:
How d’you tell the difference between someone just video-ing a crowded place and someone who’s checking it out for a terrorist attack?

How can you tell if someone’s buying unusual quantities of stuff for a good reason or if they’re planning to make a bomb?

What’s the difference between someone just hanging around and someone behaving suspiciously?

How can you tell if they’re a normal everyday person, or a terrorist?

Male voice over:
The answer is, you don’t have to.

That's right, just call the number and trained operatives will assess the threat, although we hope the threat-assessment criteria are rather more rigorous than they are in Stoke-on-Trent, where a garage mechanic recently enjoyed a spell in the cells after a member of the public mistook his MP3 player for a pistol.

And, of course, we're obliged to conclude with: "Hello, Anti-Terrorist Hotline? I've just seen a Brazilian bloke running down the Tube escalator. Can you send a team to shoot him or something?" ®