Nokia N96 to land in August

Nokia’s upcoming flagship handset, the 16GB N96, will arrive in the UK in August, according to retailer Carphone Warehouse. 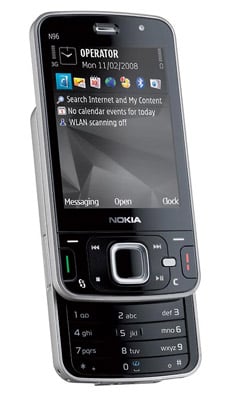 Carphone Warehouse’s website has been updated to reveal that the successor to the popular N95 will arrive in the summer. Until now, Nokia fans had been waiting with bated breath because only a vague, sometime-in-Q3 shipping date had been mentioned by the Finnish handset giant.

Unfortunately, the retailer’s website doesn’t treat us to any other nuggets of N96 news, such as an estimated UK price.

Tech specs for the phone were mistakenly leaked on Nokia’s German website last month, but the handset giant has since confirmed that it’ll sport a 2.8in display, a five-megapixel camera and 16GB of on-board memory.

Users will also be treated to live TV broadcasting, thanks to the DVB-H tuner built into UK models, and support for MPEG 4, Windows Media Video and Flash Video formats. A kickstand lets you sit the phone horizontally for hands-free viewing.

It also features media keys, a 3.5mm headphone connector and built-in 3D stereo speakers plus the Nokia Maps application with Assisted GPS. It has Wi-Fi and HSDPA connectivity.