US weaponry goliath Northrop Grumman says it has achieved the "first major building block" necessary for manufacture of a 100 kilowatt solid-state laser - that is, a viable battlefield raygun.

The company said yesterday that its Joint High-Powered Solid State Laser (JHPSSL) programme has "exceeded all target requirements of its second major demonstration milestone". This was the trial of a "laser chain" with 15 kilowatt power. Northrop intends to combine eight such units to produce a single laser beam of more than 100 kilowatts - which is generally considered the level at which energy beams would become useful combat weapons. 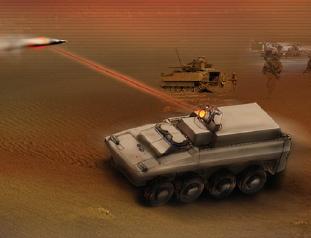 The laser tank: probably unable to fire on the move.

"Our team has developed a compact modular laser with excellent beam quality, which can be used alone or coherently combined with additional laser chains to reach 100kW and beyond," said Northrop raygun exec Jay Marmo.

His colleague Dan Wildt added: "With the successful demonstration of a complete laser chain - the building block of the fully integrated solid state laser - the hardest part is over."

However, the requirement to carry large amounts of dangerous chemical fuel - and to contain the resulting toxic hazmat exhaust products afterwards - means such weapons are cumbersome and logistically marginal. They are only deployable aboard large cargo aircraft, if at all.

Solid-state laser technology is seen as potentially better, as it could be practically fielded aboard tactical jets or ground vehicles. The idea, at least initially, would be to use lasers to explode incoming enemy missiles or shells in flight.

Northrop is bullish about its JHPSSL technology, saying it will link up its building blocks into a combat-power death ray by the end of the year. The programme is "on track for a full power system demonstration of 100kW by the end of 2008", according to Marmo.

That will be a significant milestone; but there will still be some way to go before Northrop's concepts of laser air-defence vehicles or fighter raygun pods reach service.

Such vehicles will need at least half a megawatt of electric power (the Northrop gear's electro-optical efficiency is quoted at 20 per cent), so they won't be small or lightweight: more like heavy battle tanks, nowadays rather out of fashion.

Even a mighty 60-tonne Challenger 2 would need to use more than half its engine power for the laser - in other words it would slow to a crawl when firing. Any lesser vehicle would surely stop altogether.

If Northrop really can do what it says, one might expect to see the first missile and shell-busting lasers mounted instead on warships, or in stationary ground installations to defend against rocket or mortar bombardments. ®